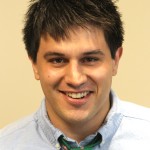 For Mario Koran, journalism began as a daily escape from a jail cell.

While serving one-year jail sentence at Wood County Jail in Wisconsin, Koran was able to attend classes at a local college. This led to his first foray into journalism, where he interviewed jail guards and his fellow cellmates.

Growing up in Marshfield, Wis., Koran dreamt of becoming a college football star until a fractured ankle during his senior year ended prospects of playing for a Division I school like Duke or Georgetown.

That disappointment led him to alcohol abuse and years of bouncing between cities and jobs. Koran served as a social worker in Chicago, taught incarcerated youth in Denver and trained as a U.S. Army combat medic in San Antonio. Again and again, he returned to alcohol.

Koran hit rock bottom after he was caught breaking into a bar in his hometown, which led to his sentence. Nine months after he was released, he wandered into a recovery meeting that changed his life.

Now 31, Koran is a master’s student studying journalism at the University of Wisconsin-Madison. Through reporting, he said, he hopes to paint a fairer picture of people who are incarcerated.

At some point, he said, “we all do something wrong.”

During an internship at the Wisconsin Center for Investigative Journalism in 2013, he published a report on the state’s dysfunctional GPS monitoring system of convicted sex offenders. In a story titled “Lost Signals, Disconnected Lives,” Koran showed how offenders who sought to move on from their crimes were repeatedly arrested after the GPS ankle bracelets malfunctioned and signaled police erroneously.

The story prompted the Wisconsin State Legislature to withhold funds from the GPS monitoring program.

“I think in our profession or career we hope that we can make a difference,” said Koran. “Sometimes we do.”

Koran, now two years sober and a father of a 2-month-old girl, will be an investigative intern at the Milwaukee Journal Sentinel this summer.