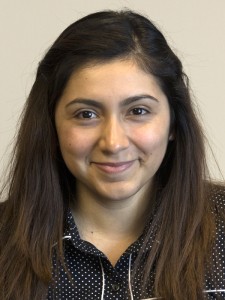 Vanessa Martínez accessorizes any outfits she wears, whether casual or formal, with a yellow bracelet that reads “Livestrong” and a green one that reads “Alice Rocks!”

The two bracelets, which both hang on her left wrist, represent her cousin’s battle with cancer and the good luck she’s had in journalism since the accessories became part of her everyday fashion two years ago.

Martínez, 22, wears the jewelry as a tribute to her cousin Alice Flores, who died at age 27 from cancer on March 21, 2011. Flores, who Martínez says was like an older sister, encouraged her to apply to California State University, Fullerton, to follow her passion for journalism. Martínez graduated on May 26 with a double major in print journalism and Spanish.

Martínez said her good luck charms might have even had a little to do with her selection for two competitive programs, The New York Times Student Journalism Institute and a Fullerton-sponsored reporting trip abroad.

At the Institute, Martínez is focusing on page design. “It is not the same to read a magazine or a newspaper on your computer than to see it in print all laid out, and it looks pretty cool and you’re actually holding the product in your hands,” she said.

Before the Institute, Martínez traveled with 10 other Fullerton students to work as volunteers and reporters in Vietnam. There, she wrote a profile on a Vietnamese refugee, Quynh Kieu, who established a nonprofit medical organization that has helped more than 60,000 patients.

“I got to embrace another culture and I got to be thankful for what I have – freedom,” Martínez said.

At Fullerton, which is 30 minutes southeast of her hometown in Whittier, Calif., she worked for two student-run publications, and last summer she interned as a page designer for Home Media Magazine.

As she talks, Martínez plays gently with her bracelets, observing that they remind her of her cousin’s strength.

“I smile and I get a little sad, but in the end I feel like I am not alone in whatever I do,” Martínez said. “It’s motivation.”