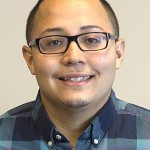 Born and raised in the Bronx, N.Y., Pinto remembers his mother reading to him every night as a boy. In his teenage years, she forbade him from hanging out on the street after school, fearful that he would get into trouble.

“She didn’t want me to be a product of our people,” said Pinto, whose mother, a hospital secretary, had him at 18.

Instead, Pinto spent his free time reading and watching stories about members of his community, people whose lives were often portrayed as irreconcilably bleak.

To highlight more nuanced stories in his community, he chose to pursue journalism.

“The thing about New York City is that whenever there’s a story about the Bronx, it’s going to be about crime,” said Pinto, 25. “I wanted to do something that can benefit them.”

A self-described fan of hip-hop, designer sneakers and Junot Díaz, Pinto said he wants to remind people in the Bronx they are more than the labels of drugs and violence that define their neighborhood.

After graduating from A. Phillip Randolph High School, Pinto attended Hunter College to study creative writing and media studies, working at a real estate office on the side. In 2010, he became one of the first members of his family to graduate college.

“I wanted to set an example for my cousins and younger brother,” said Pinto, whose mother is Puerto Rican and father is Ecuadorean. “It was rough, I was struggling at first, but then I got invited to Arizona.” He added, “Now they can see I’ve worked hard, and what they can do.”

Pinto is now pursuing a master’s degree in journalism from the City University of New York. Through internships at The Hunts Point Express, Bronx News Network and Mott Haven Herald, he has written about the shoddy construction of low-income homes and pastors working in struggling communities. He has also worked as a stringer for The New York Times.

Interning at Newsday this summer, he has one goal: to stay out of a cubicle.

“I want to be with people, to hear their stories, how they live,” he said.