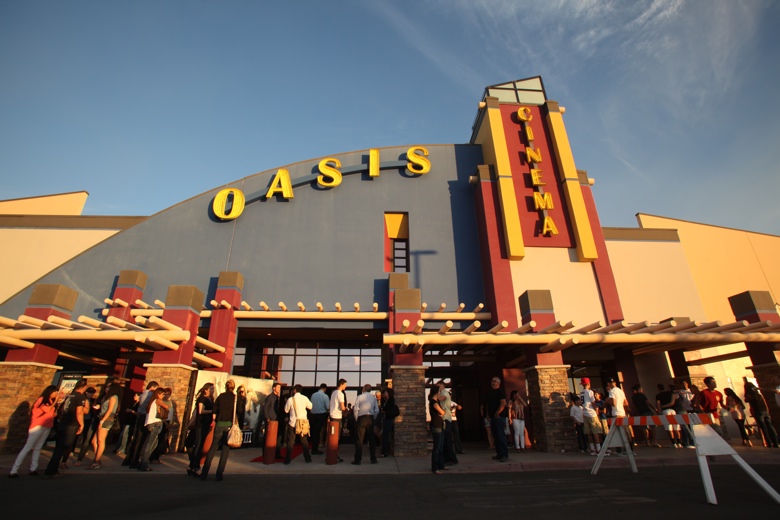 People awaiting the local premiere of "The Hangover Part III" outside the Oasis Cinema in Nogales, Ariz. Parts of the movie were filmed there. Elaine N. Cromie | NYT Institute

More about the event

But that didn’t matter to the hundreds of Nogales, Ariz.,  residents who gathered Friday night to see their little town appear on the big screen in “The Hangover Part III.”

Who needed star-studded celebrity types at the town’s only movie theater? Nogales had its own VIPs.

“Ever since I came out in the movie, I tell my friends ‘I’m too Hollywood for you,’” said Georgina Mendivil, in a mix of English and Spanish. She lives in nearby Rio Rico and was an extra in the movie. “They have to pay for my food and everything because right now, I’m just too diva.”

Last October, the movie’s cast and crew set up shop in this border outpost for two weeks. They transformed the downtown area into a fictional Tijuana and employed about 200 extras. 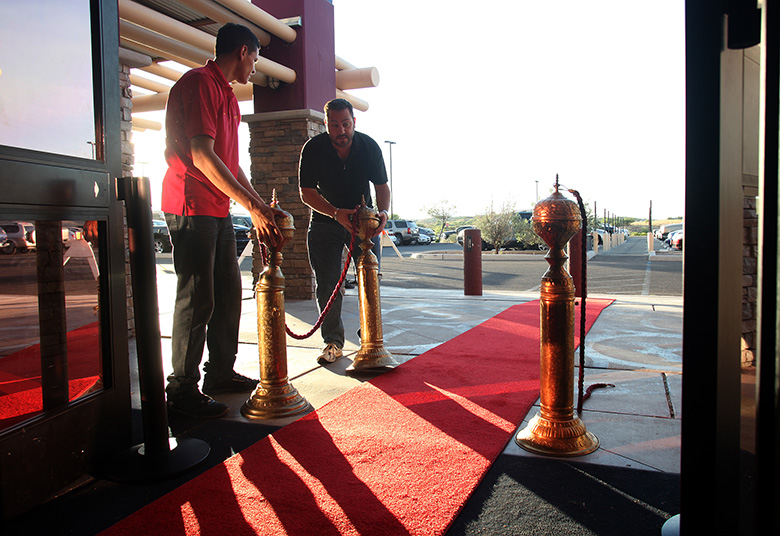 Employees of the Oasis Cinema in Nogales, Ariz., prep the red carpet for guests of the showing of "Hangover III." Local residents, who had small acting roles in the movie, enjoyed the Hollywood treatment Friday night. Elaine N. Cromie | NYT Institute

The Oasis Cinema, the mayor’s office and the local newspaper organized Friday’s premiere with a wine and cheese soirée that offered extras a chance to revel in their 15 minutes of fame — or more accurately, their 15 seconds.

Extras rolled up to the movie theater in black SUVs, strutting their non-designer attire down a mock red carpet, followed by paparazzi-like local reporters.

“We’re teasing ourselves a bit, putting on a gala event for the extras and saying we’re the stars,” said Susan Clarke-Morales, general manager of the Oasis Cinema. “But to us in the community, they are.”

The movie, the latest installment of “The Hangover,” has the franchise’s three screwball friends ending up in jail after breaking into a drug kingpin’s mansion. Producers considered six other towns to serve as stand-ins for the on-screen Tijuana.

But Nogales won out in the end.

The Tijuana Police Department depicted in the movie was in reality the Nogales Post Office. At Friday’s screening, the audience burst into applause when the simple, two-story building debuted on screen — for a shot that lasted a grand total of two seconds.

During filming, locals flocked to the downtown area to catch a glimpse of the Hollywood actors and vie for roles as extras in the film.

“Fans will do whatever it takes to get closer to the artist,” said Damian Ramirez, a Nogales resident who often visited the set after his classes at Cochise College.

Mariluz Burr was one of those fans. Burr said that on the first day of the shoot she sneaked onto the set by pretending to deliver a package to a shop in the midst of the action. She walked around, elated to see the actors. There was Cooper with his movie star looks, and Galifianakis — “el gordito,” the chubby one, she called him.

But she wanted to be in the movie. After the mayor’s wife asked the town for more extras, Burr landed a job walking in the background of several scenes.

Her shining moment was getting a limb on camera.

“If I get to come out in the movie, it’ll be just a shot of my leg,” Burr said in Spanish. In a scene with Galifianakis, who plays Alan and Ken Jeong, who plays Dr. Chow, she said, “the camera is focused on Alan and Chow sitting on a bench and then I walk by and my leg comes out!”

Even the head honchos of the town participated in the film. Mayor Arturo R. Garino said you could see the top of his balding head. Vice mayor Nubar Hanessian was filmed in three different scenes, none of which made it into the final cut, but the catered dinner offered to the extras made up for it, he said.

Diego Alvarez, of Nogales, received a special honor: The 22-year-old University of Arizona student was the only extra with a speaking role. The director, Todd Phillips, gave Alvarez a script with his lines.

“I still keep that paper in my sock drawer,” he said. Alvarez showed up to the red carpet event in a snazzy dark blue suit and his black shirt’s top button fashionably undone.

He played a prostitute, and though the scene wasn’t in the movie, it did appear in the trailer — Alvarez’s crowning achievement.

After the screening, the organizers of the event handed out awards for best actor (Jim Burton) and actress (Mayra Hernandez). The screen time for the recipients of both these awards added up to about three seconds.

For Garino, the excitement of the filming was about more than just a movie.

“We’ve been having a bad rap with documentaries about issues at the border and crime,” Garino said. “To have a movie, even though it’s fiction, to have an image that Nogales is safe, you can’t beat that.”

And perhaps, some mused, this wouldn’t be Nogales’ last appearance in the spotlight.

“Hopefully, the director of ‘The Hangover’ could consider Nogales for other movies and suggest us to his director friends,” said Amanda Maken, 21. “Maybe he can put us on the map.”

Last October, the cast and crew of “The Hangover, Part III” shot on location in Nogales, Arizona and caused a frenzy in the town. About 200 nearby residents played extras in the film. On May 24, the local movie theater in Nogales organized a red-carpet event for the extras who appeared in the film.

Last October, the cast and crew of “The Hangover, Part III” shot on location in Nogales, Arizona and caused a frenzy in the town. About 200 nearby residents played extras in the film. On May 24, the local movie theater in Nogales organized a red-carpet event for the extras who appeared in the film.