He could be called a flying coyote, hidden by the cover of night.

James Reed Bissell, a pilot, was charged with attempting to fly a single-engine airplane to transport three people who crossed the border illegally on Monday, according to a criminal complaint filed this week in U.S. District Court of Arizona.

The federal complaint said that Border Patrol agents saw two cars arrive at the small, dusty Bisbee-Douglas International Airport on Monday and approached a small airplane where Bissell waited in the cockpit.

Bissell then opened the door and two men and a woman got out of the cars and entered the plane, the complaint said. The three admitted that they “were not citizens or nationals of the U.S. and that they did not possess documents to be in the U.S. legally.”

Agents then moved in to make the arrests.

In a desert setting 9 miles from the border, the airport is a quiet complex adjacent to a state prison site and not far from Cochise College.

Only one airplane could be seen on the deserted runway on Saturday.

Three state firefighters were on duty in a trailer near a taxiway, as part of the effort to combat forest fires in the region. They said the airport was usually sleepy.

“It’s odd when we see a plane,” said Steve Rogers, a firefighter who has worked at the fire station for four years. “Once in a while we might see a cargo plane transporting prisoners.”

But drug runners and others illegal border-crossers attempting to make their way north are a problem.

Nearby, in one of four hangars, three men who were repairing two single-engine airplanes said that they occasionally did see some flights. 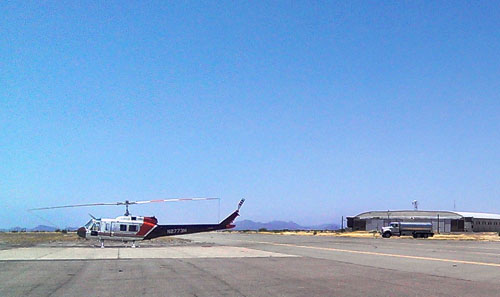 The runway is mostly used by Cochise College, said Javier Armenta, an aviation technology employee of the college. “The most planes we see are maybe three or four on the weekends,” he said.

Another worker in the hangar declined to give his name, but explained that the airport is still designated as Bisbee-Douglas International because it once used to be a busy stop for small planes bound for Mexico before most of those planes began using a bigger airport in Nogales.

An “ultralight plane” once approached the airport at low altitude, the worker said. He saw it “drop off a bale of marijuana” before flying away, and Border Patrol agents seized the marijuana.

According to the federal complaint, Bissell “had been employed for approximately one year in this capacity, flying three flights a week with approximately three to four passengers per flight.”

He had “stated he was hired as a pilot by two females to fly one-way trips from Douglas to Chandler, Arizona,” about 25 miles out of Phoenix, and was paid $900 for the flight and another $900 for a previous flight.

A Border Patrol spokesman did not immediately respond to a request for comment on a scheduled court appearance for Bissell and any possible charges for the passengers.