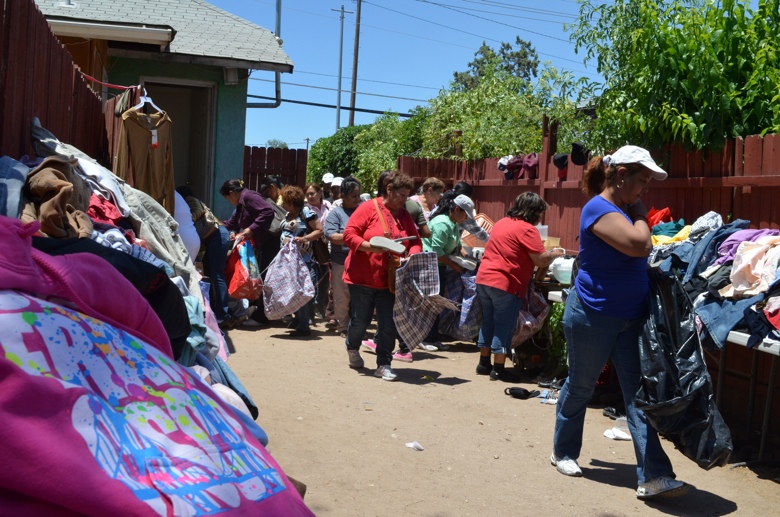 People rush the mountains of clothes on the tables to pick out items for their families. Dozens of residents travel from Mexico to the Crossroads Rescue Mission in Nogales, Ariz., each week to get food and clothing they cannot get in Mexico. Danya Pérez-Hernandez | NYT Institute

Early every Saturday morning, dozens of Mexican residents get in line to cross the border into Nogales, Ariz. They will go home fed, clothed and emotionally recharged.

“We get nourished both physically and spiritually,” said Ana Sosa, 60. She has been crossing most Saturdays during the past two months to get help at the Crossroads Rescue Mission in Nogales, Ariz.

This mom-and-pop mission offers meals, shelter, food bags, clothing and the Christian gospel to people from both sides of the border. Under the supervision of Ben and Bert Wenke, a husband and wife from Kansas, the mission opened its doors in 1995 as part of the Association of Gospel Rescue Mission.

“We knew that there was a tremendous need over there,” said Ben Wenke. “Back in the 1990s, I was crossing into Mexico going to prisons and going to colonias and such. A man would interpret for me and we would give away food.” 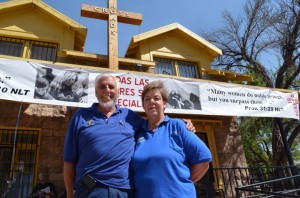 Ben and Bert Wenke stand started the Crossroads Rescue Mission in 1995 with a budget of $900. "We knew that there was a tremendous need over there," Ben Wenke said. Danya Pérez-Hernandez | NYT Institute

After working for five years in a shelter in Tucson, the Wenkes moved to Nogales, Ariz. After seeing the need of the community divided by the U.S.-Mexico border, they decided to stay. They began with a $900 budget.

“We had one month’s rent down there and we took a Coleman stove, went down to the plaza and boiled hot dogs and potato chips and gave them out to people,” said Ben Wenke.

The mission offers shelter only to U.S. residents and citizens, but the meal services on Monday through Saturday are open to anyone. Usually on Saturdays, about 90 percent of the attendees are from Mexico.

Ben Wenke said they currently have about 175 volunteers, including 16 regulars from Mexico. It is common for those who have been helped to stay on as volunteers.

Rafael Temblador, 82, who has volunteered at the mission for more than 11 years, said it is rewarding to see people from both countries working together. He lives nearby in Rio Rico, Ariz.

Lupita Valencia, a resident of Nogales, Ariz., has been a volunteer at the shelter for about 12 years, ever since the shelter helped with donations for her newborn grandson.

“It’s really beautiful to be able to help, because they all come with a lot of necessity,” said Valencia. “There is no help over there. If there was, these people wouldn’t be waiting in the heat to get help here.”

After a lunch of spaghetti and meat sauce, picking up groceries, and filling their bags with used clothes, a group of women headed toward the border, stopping to seek shelter under the scarce shade of trees. They had waited two hours at the border port of entry to get to Crossroads, and still had a two-mile walk home ahead of them.

“It is worth crossing,” said Ana Ramirez, 59, adding that she has never received this type of help in Mexico. “Over there they just tell you to tighten your belt if you are hungry. Sometimes you just can’t get it any tighter.”