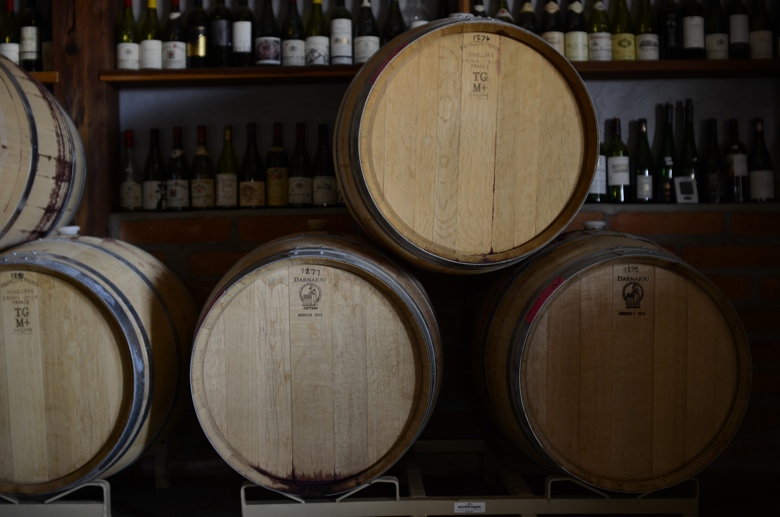 The barrel room inside Dos Cabezas WineWorks. A series of favorite wines from around the world line the wall behind the barrels. Anibal Ortiz | NYT Institute

Above the Desert, a Vineyard Town Blooms

Along the drive south to the small town of Sonoita, Ariz., it is difficult not to be struck by the sheer beauty of the landscape, where the Tucson desert falls back and gives way to an expanding prairie dotted with ranch houses.

The closer you get to Sonoita, its charms — and even its existence — can get called into question, as civilization fades with each passing mile. 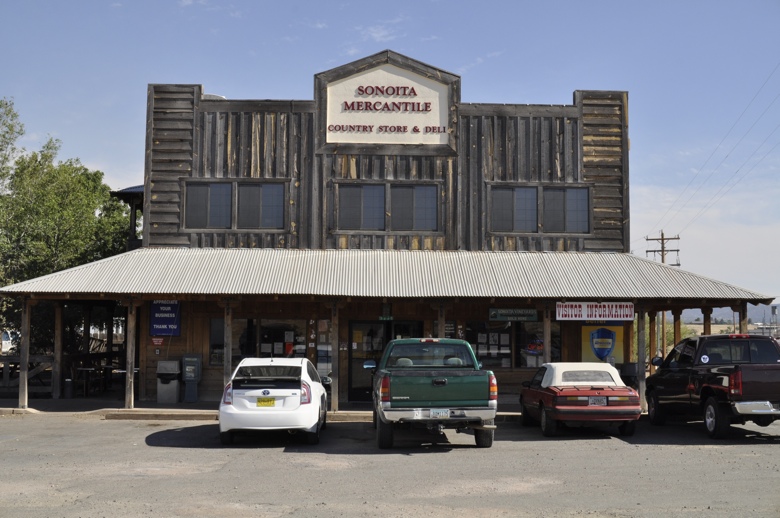 The town doesn’t come into view until Route 82 hits Route 83 at what might pass for the center of Sonoita. There is a cafe, which serves traditional comfort food, and a cowboy-themed restaurant, popular among the bikers who stop for gas at the nearby Sonoita Mercantile, the town’s only gas station.

And yet Sonoita, a town of 800 people about 30 miles from the Arizona-Mexico border, has become a burgeoning tourist magnet, as unlikely a candidate as any along the country’s many off-the-beaten paths.

The area boasts 12 wineries, a growing number of bed-and-breakfasts, a clear night sky that attracts stargazers, and one of the top Navajo quilters in the nation. 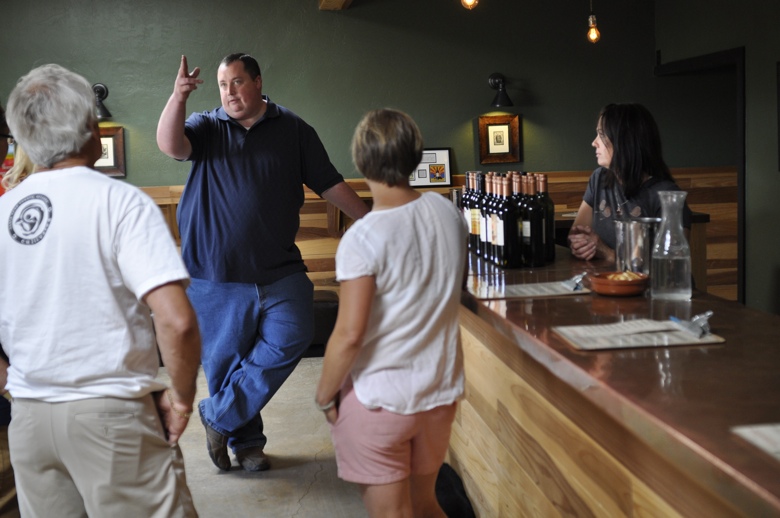 The latest addition to Sonoita will be one of Phoenix’s top-rated chefs, Greg LaPrad, who is leaving his two restaurants there, Quiessence and Morning Glory, to open one in Sonoita.

Looking out of the seating area of LaPrad’s yet-unnamed restaurant along Route 82, the lure of Sonoita is apparent. Diners will be able to see the picturesque 20,000-acre expanse of the Vera Earl Ranch, and LaPrad will be able to tap into the area’s rich soils, livestock and local wine — fitting with his farm-to-table philosophy.

“I love the idea of being off the culinary beaten path,” said the 31-year-old LaPrad. “I love the area. It is completely different and beautiful.”

LaPrad said he planned to open his restaurant by mid-August, in time for the Labor Day rodeo at the fairgrounds. He already has customers from Phoenix promising to make the two-and-one-half hour trip.

Of the 48 wineries in Arizona, a dozen are in Sonoita and a nearby town, Elgin, which have the distinction of being in the state’s only American Viticultural Area, a federally recognized wine grape growing region. 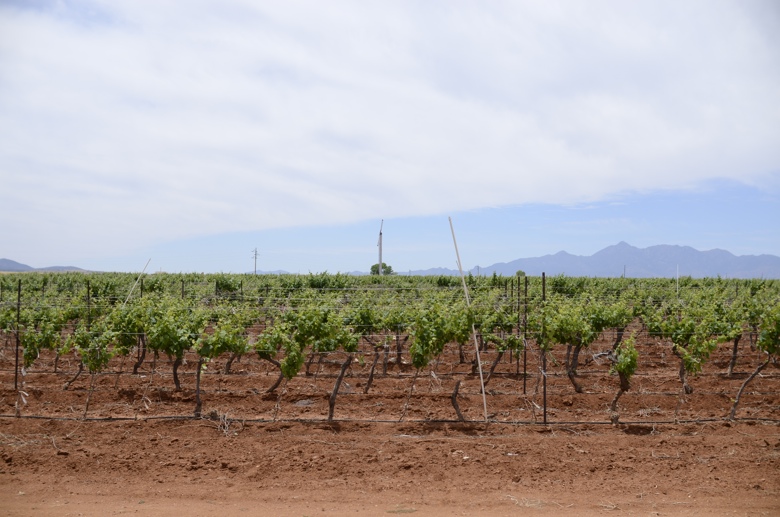 Around here, there isn’t a cactus in sight. Sitting at about 5,000 feet above sea level, the area’s cool temperatures have made it an ideal place for farmers, ranchers and winemakers.

On the road to Callaghan Vineyards in Elgin, it is not uncommon to drive by burros, antelope or alpacas. As you approach the property, the red clay soil underneath lush green vines falls against a backdrop of the Southern Arizona mountains, offering a view that stuns.

“The wine here has a distinct taste. It’s tannic, stringent and built for aging,” said Kent Callaghan, 47, who started the vineyard with his parents in 1990. “There is diversity for taste, interesting tastes.”

The first vineyard in Arizona was opened in 1979; Gordon Dutt, a soil scientist at the University of Arizona, was given a grant to study winemaking conditions in the four corner states, Arizona, Colorado, New Mexico and Utah. Dutt found the area in Sonoita optimal, and opened his vineyard there.

When the Callaghans started, they were one of three local vineyards. A majority of the vineyards have opened within the last couple of years, but Callaghan said he doesn’t mind the competition. He said the wineries help the region to grow, as people come back to visit a new one, or make a weekend out of their visits. 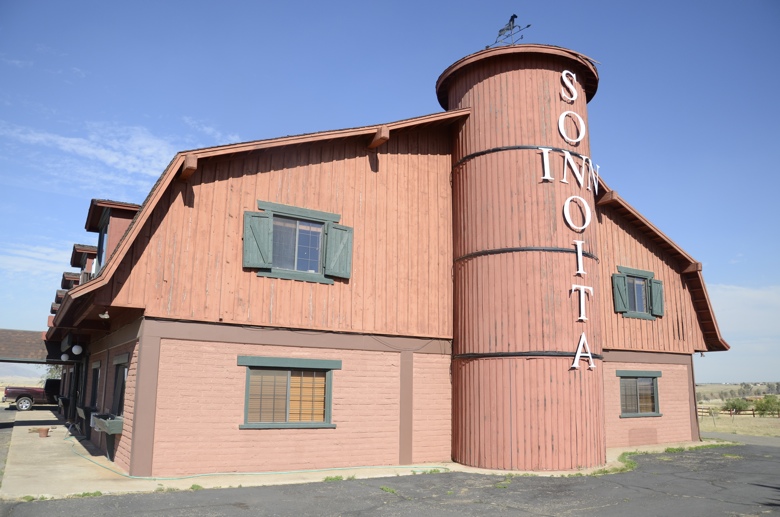 The Sonoita Inn resembles a large barn. It was designed by the owner of the Triple Crown-winning racehorse Secretariat. Anibal Ortiz | NYT Institute

Visitors can stay at the Sonoita Inn, which resembles a large barn and has a maximum occupancy of 75. The Inn can sell out during events like the Quarter Horse Show, the rodeo and the Santa Cruz County Fair, which are held at the nearby Sonoita Fairgrounds.

A number of B&B’s on ranches are also available, including the Guest Walker Ranch, whose amenities include racquetball, a pool and a spa. Horses can also be accommodated for an extra $20 a night.

Busy season in Sonoita is from October through November and February through April, but motorcycle enthusiasts can be seen regularly. Bikers favor State Routes 82 and 83 for their winding paths and views.

“We drive from Nogales to Tombstone and make this trip about three to four times a year,” said Miguel Anguidano, as he was refueling his Harley. “The scenery is beautiful on 82.”

Anywhere from 200 to 300 bikers can ride through town on a summer day, according to a clerk at the Mercantile. And they do not merely stop for gas: Kief Manning, the 30-year-old co-owner of Kief-Joshua Vineyards, said that motorcycle clubs often visit his Tuscan-themed winery for Sunday brunch and tastings.

Less than a mile up the road from LaPrad’s restaurant is Arizona Hops and Vines, a vineyard and soon-to-be brewery run by two sassy sisters in their 30s from Orange County, Calif. 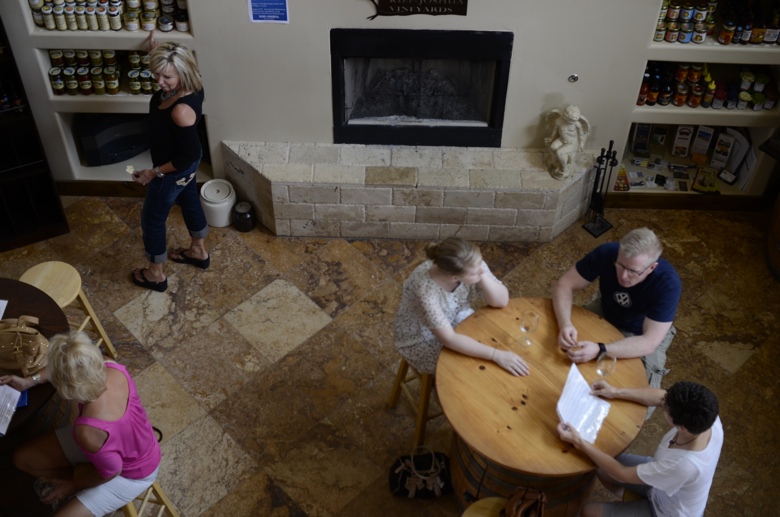 Winetasting at the Kief-Joshua Vineyards in Elgin, Ariz. There are 12 vineyards in the "Mountain Empire" around Sonoita. Anibal Ortiz | NYT Institute

Wines with names like Imbibe, First Crush and Moxy are paired with potato chips and Cheez Doodles. Farm animals like Kevin Bacon the pig and Clint Eastwood the donkey wander around a small petting zoo for children.

With its themed events, the vineyard has been drawing a younger and hip crowd than many vineyards. Recently the sisters became the first growers of hops in Arizona, and will soon sell them to local breweries as well as create their own beer (they said their first will be an India Pale Ale). A practice batch of hops yielded a hops-fermented wine called the Drag Queen, the bottle laced in a net stocking.

“I am really happy they are catering to the young crowd and stepping out the box,” said Selene Gastelum, 24, an attendant at the Sonoita Inn who moved to Sonoita two years ago from Tucson.

Another worker in Sonoita said that it always feels like Sunday there, and that notion seems to be catching on.

“We are laid back and rural, and city people are liking it,” said Callaghan.

CORRECTION: This post has been updated to correct that chef Greg LaPrad is leaving his two restaurants in Phoenix, Quiessence and Morning Glory, to open one in Sonoita; the Phoenix restaurants are closing for the season, but not permanently. It also corrects three names in the article: the owner of a vineyard is Kent Callaghan, not Kenny; another vineyard owner is Kief Manning, not Keif; and his vineyard is Kief-Joshua Vineyards, not Joshua-Manning Vineyards.