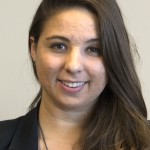 Growing up, Hannah Winston wanted to become an astronaut.

It wasn’t until one of her high school professors gave her a copy of Truman Capote’s “In Cold Blood” that she discovered she loved to tell stories and realized it was possible to write about real events with a literary style.

“When I found out it was nonfiction,” Winston said, “It kind of blew my mind.”

Born in Pompano Beach, Fla., Winston, 22, has lived in South Florida all her life. She is a recent graduate of the University of Florida, where she majored in journalism and learned to work in radio, broadcast and print media.

In January, Winston began working with News21, an investigative reporting project at Arizona State University, where she will be examining the lives of post-9/11 veterans and the promises made by U.S. government officials to help veterans readjust to life at home.

Winston has also worked for The Independent Florida Alligator, the student newspaper at the University of Florida, WTOP Radio, WUFT-FM, The Gainesville Sun and the Washington, D.C., bureau of ABC News.

Through journalism, she has ventured into many different forms of storytelling. She worries that schools are pushing students to pursue too many skills and become jacks-of-all-trades in order to land jobs.

Winston said that in her experience, major newspapers want specialists who focus their talents and adhere to quality over quantity.

One of Winston’s passions is video, a practice she loves so much that her friends sometimes tease her for working late nights to get the perfect edit.

For Winston, journalism’s transition from print to online is an exciting one. Instead of publishing a static story on a sheet of paper, news outlets can now apply interactive elements that help readers better understand a story, she said.

Still, Winston retains her passion for the written word. She hopes to perhaps  someday “pull a Hemingway” — switch from being a journalist to a novelist, and maybe write the next great American novel.