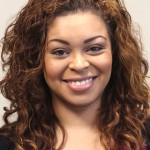 The path to journalism seemed inevitable for Jeannette Cruz, whose childhood was marked by artistic expression. As she transitioned from notebooks full of poems to songs and then to stories, Cruz knew she simply wanted to write.

Selecting a college major was not a complicated choice.

She enrolled as a journalism major at Arizona State University in fall 2010, and later declared creative writing as a second major and Spanish as a minor. While unsure of what that combination would mean for her future, she was hopeful that her curiosity would drive her writing.

That curiosity peaked during a trip to her mother’s childhood home in El Salvador, where she witnessed a flood of poverty for the first time. That experience, she believes, is a reason her stories will one day take her around the world.

At 21, she leads a busier life than many college seniors. During the most recent semester, she completed two internships while raising her daughter, Jeymari, now 8 months old — the first person she thinks of after she conducts a successful interview.

Her internship at Arcadia News, in Phoenix, and freelance work for her neighborhood newspaper, The West Valley View, introduced her to the newsroom. Among the topics she covered, Cruz fondly recalled a series on the need for more foster care in Arizona.

“For me it’s never been about the money or any of that,” Cruz said. “It’s just the stories I write, the people I meet, and the public I reach.”

As part of The New York Times Student Journalism Institute, she will focus on editing, hoping it will help improve her skills as a writer.

She expects to graduate in 2014 and sees many possibilities in her journalistic future. At times, she envisions becoming a magazine writer or editor. Often she pictures herself as a travel writer. But no matter where the field takes her, she is grateful she followed her instincts.

“Journalism has really made me realize that everyone has a story and that you shouldn’t really judge people right off the bat,” she said.