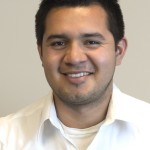 Growing up, James Barragan admired his parents’ success. They had emigrated from Mexico, worked various jobs and saved every penny to make ends meet. Despite those struggles, Barragan excelled in his education. He was awarded a full ride to the University of California, Los Angeles, and eventually worked his way from reporter to editor-in-chief of the school’s newspaper.

Barragan, the youngest of two, was raised in Pomona, Calif. He grew up speaking fluent Spanish, reading The Los Angeles Times and dreaming of becoming a fiction writer.

At the end of his freshman year, Barragan joined the Daily Bruin as a reporter, covering student government, tuition raises, faculty pay and features.

“I started writing for the paper, and it turned out that I was really good at it,” Barragan, 22, said. “I really liked it and I just stayed on.”

Barragan then became a campus news editor, assigning and editing stories about student government and administration.

That experience led him to a reporting internship last summer at HuffPost Voces, the Spanish-language website of the Huffington Post, covering immigration, Latino issues, film and sports.

This past year he served as editor-in-chief of the Daily Bruin, overseeing the administration and workflow of the newsroom. “It was a lot of fun, and it was rewarding,” he said. “But it was also really hard being in charge of so many people.”

After The New York Times Student Journalism Institute, Barragan will head to the Austin American-Statesman as part of the Chips Quinn Scholars program.

Barragan is to graduate on June 14, and hopes to become a reporter for The Los Angeles Times.

“I learned how to read by reading the LA Times,” Barragan said. “It would be nice to come full circle.”