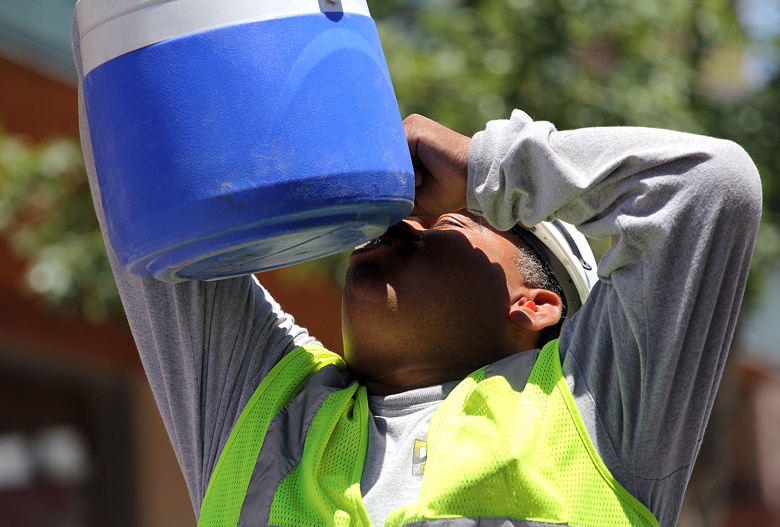 The dry and hot climate at this time of year reminds a construction worker, Moreno Garcia, to drink plenty of fluids to prevent dehydration in Tucson. Alex Wroblewski | NYT Institute

One Day When It Is the Heat, Not the Humidity

It was May 22, and in the blistering heat of the Sonoran Desert, people in Tucson feigned dismay but harbored excitement as they wondered if it would be Ice Break Day.

Ice Break Day, for those who live where the sun doesn’t blaze so fiercely, is the name locals have assigned to the first day of the year on which the temperature hits 100 degrees. And it’s an event. Kind of.

The temperature landmark causes some commotion at local television station KVOA, which awards a five-night Hawaiian vacation to the one of five prescient individuals who comes closest to guessing the exact date, hour and minute the thermometer will break 100. The station also gives away an air-conditioning and heating unit, a five-night stay at a casino hotel, a barbecue grill and a bicycle.

“Nothing celebrates 100-degree temperatures like giving away a bike,” said Jeff Beamish, the KVOA weatherman, who was intently tweeting the progress of the temperature all afternoon. 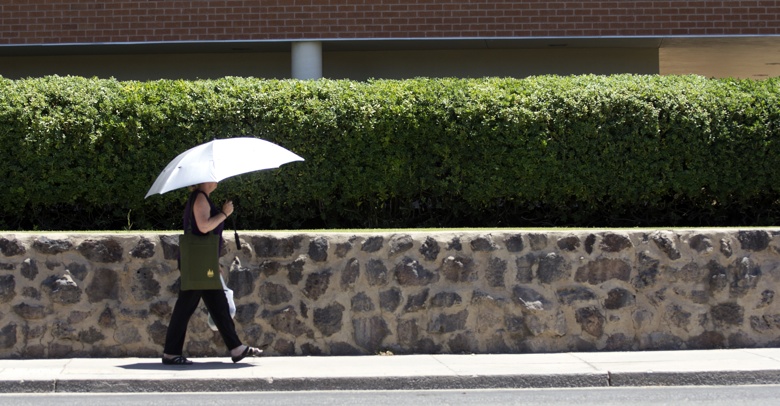 With hotter days in store, Tucson residents find ways to protect themselves from the high temperature. Alex Wroblewski | NYT Institute

On average, since 1895, temperatures in Tucson have hit 100 degrees for the first time of the year on May 26. But over the past 10 years, the mercury has been moving more slowly.

Beamish said the city reaches the 100-degree mark 62 times a year, and he was not concerned that it hadn’t happened yet for 2013.

“I wish I could tell you something more exciting, like Champagne falls from the heavens, or everybody gets free ice cream,” Beamish said.

At 1 p.m., the thermometer registered 97 degrees. (Incidentally, for those in the running for the Hawaii vacation, the temperature in Honolulu was 79 at the same hour.)

But the day was not over.

Beamish was keeping his hopes high. In one of his tweets on the “True View Forecast” he asked, “Will we finally hit triple digits today?” That was at 10 a.m.

The temperature continued to climb.

“Lunchtime temps in the mid 90s at @TucsonAirport,” he tweeted. “On track for an official daytime high of 99.”

And at 4 p.m.: “Can’t get over the 98-degree hump in #Tucson today. Still another hour of prime heating, but the chances of hitting 100 degrees are fading.”

Meanwhile, in Phoenix, 116.2 miles to the northwest, 100-degree weather was already old news. Phoenix had its first 100-degree day of the year on April 29.

But at the B and B Cactus Farm in Tucson, 99 actually isn’t different from 100 to a cactus, Mark Sitter, the owner, said.

“The plants, they measure the day length, the average temperatures, but a degree one way or another doesn’t affect the plant’s growth,” he said.

Sitter said his farm’s production is not affected by that extra degree, and it would only be “if it were 30 degrees’ difference.” Or, he added, “suppose a huge volcano erupted in Mexico.”

You don’t need a weatherman to know when it hits 100, Sitter said. His indicator is when he hears “the first cicadas of the year.”

Jonathan Rothschild, mayor of Tucson, said he was not disappointed that the day had not yet arrived.

“I don’t think too many Tucsonans look forward to that first day over 100 degrees,” he said. “One thing we do look forward to, and we ought to start noting and celebrating when it comes, is the last day the temperature hits 100 degrees.”

Another local television meteorologist, Erin Christiansen, of KGUN, predicted that Ice Break Day could be much later than usual.

“It’s looking as though we might actually put it off until after the average triple-digit day this year,” he said, noting that last year the day came on April 22, which was especially early. “If we don’t hit it today, it’s not as though we have another chance right away.”

She added, “It is a big deal for people here because it’s like, ‘OK, this is the start of summer.’ Usually the first triple-digit day is kind of an indicator for us that, OK, the heat is on and there’s some rain relief around the corner.”

Christiansen explained that the first 100-degree day “foreshadows” the monsoon season — the rainy season of July and August.

She said there was a 10 to 15 percent chance that the mercury would hit 100 before the end of the day.

Sitter said he has his own method of predicting the first 100-degree day.

“I listen for the ice cracking on the Santa Cruz,” he joked. “And the first cicadas of the year.”

He listens every morning, he said, and he hasn’t heard them yet.