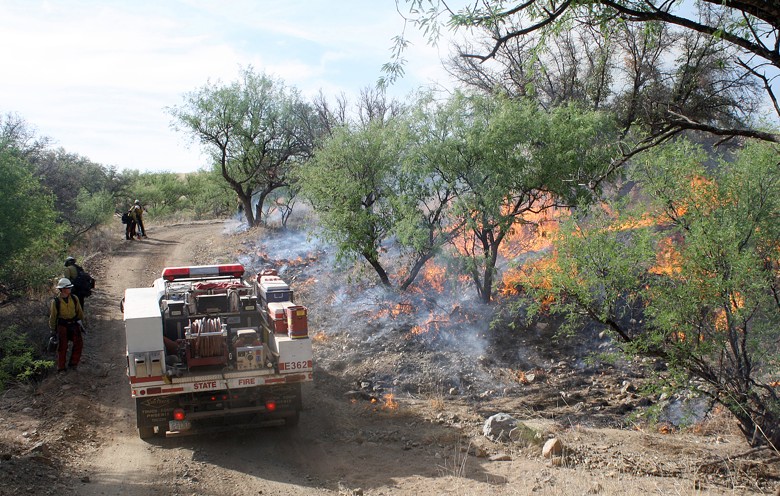 A wildfire near Nogales believed to be caused by humans has spread to an estimated 7,500 acres, forest officials said, but is not expected to threaten nearby structures.

Officials said they expected the fire will grow over the next five to six days and advised residents living east and southeast of the wildfire to prepare for smokier air.

“The biggest concern is for people with health concerns because overnight, the smoke will get heavier and settle into low-lying areas,” U.S. Forest Service spokeswoman Michelle Fidler said.

“We encourage folks to consult with their physician and in general stay indoors during this smoky time period,” Fidler said. Children and adults with heart or lung disease are at greater risk from inhaling smoke. 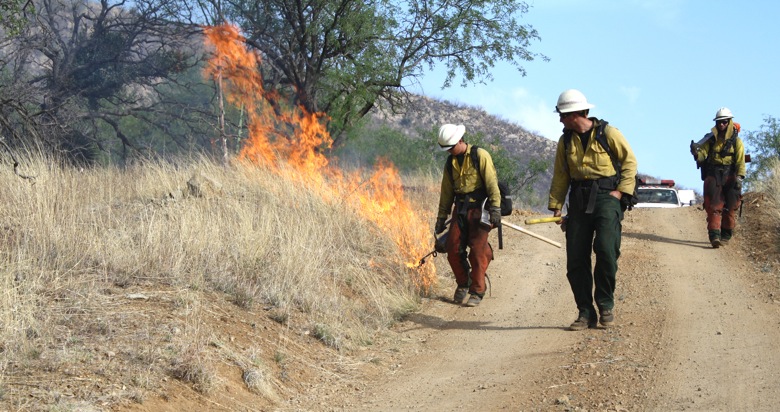 Approximately 205 firefighters have contained 40 percent of the wildfire, which mainly burned grass and brush in Soldier Basin, an area of steep, rocky terrain.

The blaze is in the Coronado National Forest, 3 miles east of the Nogales Airport and 3 miles south of Patagonia.

The area has not seen a fire this size in more than 20 years, said Mike McGuire, division-training supervisor for the Rio Rico Fire District.

Local agencies will coordinate with the U.S. Forest Service to investigate the cause of the blaze. Officials found no report of lightning Friday, the night the wildfire began, which led them to believe it was human-caused.

On Tuesday, local rancher Will Smith described the area as a fertile grassland for the hundreds of cattle that roam his property, located near the center of the fire.

The region, according to Smith, is also frequented by a large number of drug smugglers. Smith wondered whether they might be responsible for starting the blaze. 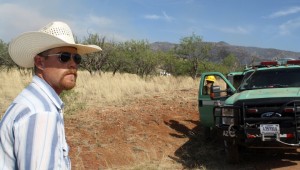 Will Smith manages T4 ranch in Patagonia, Ariz., where he cares for hundreds of cattle. He believes the fire may have been caused by drug smugglers. Kristian Hernandez | NYT Institute

“This morning, right through the middle of the fire, there were some that came through,” said Smith, who manages T4 Ranch. “The smugglers left one of my waters open and opened my gates.”

“We are really trying to contain it,” McGuire, from the Rio Rico Fire District, said.

Firefighters plan to eliminate debris before the fire approaches by dropping plastic, flammable balls from helicopters to create strips of fire called “fire lines” miles away from the blaze, said Fidler, of the Forest Service.

As the wildfire approaches the fire lines, officials will use torches to burn along these lines and force the fire to retreat.

“We want it to be a gradual methodical process. We expect the acreage to increase and smoke to increase,” Fidler said.

The Coronado National Forest is 1.7 million acres, roughly the size of Delaware, with elevations ranging from 3,000 to 10,000 feet.

Arizona’s unusually wet winter and a resulting growth of grasslands is likely to make the 2103 fire season “above normal,” wildfire experts told the Arizona Republic in March.

“This is the driest time of the year, but it’s drier than normal,” said Gerry Perry, a public information officer with the U.S. Department of Agriculture Forest Service.

The Wallow Fire, the largest wildfire in the state’s history, blazed more than 828 square miles of eastern Arizona in 2011, likely due to that year’s severely warm and dry winter.

3,800-acre fire in the Coronado National Forest. 200 personnel on the ground. “Very steep and… instagram.com/p/ZmEq04qMyX/

On the front lines of the Soldier Basin Fire. instagram.com/p/ZmEQ58qMxp/