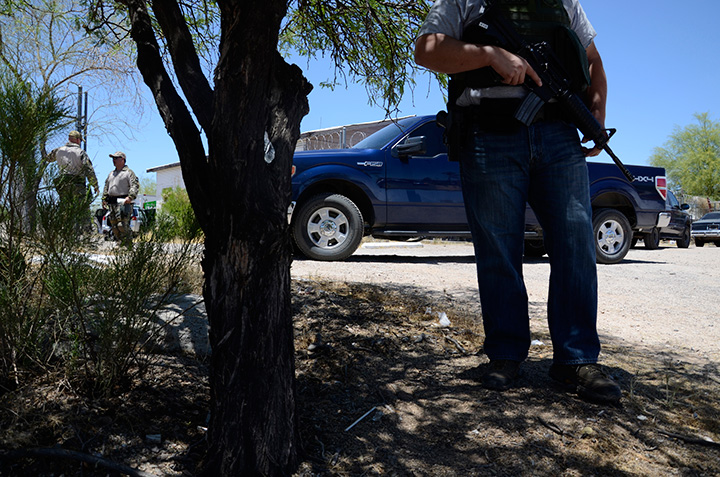 More than 50 officers from agencies across Pima County swooped into a former auto wrecking yard during an FBI-led raid in the Julia Keen section of Tucson on Thursday morning.

Startled neighbors watched law enforcement officers armed with rifles crossing the street to a lot with two garages and an area in the rear that held wrecked cars. 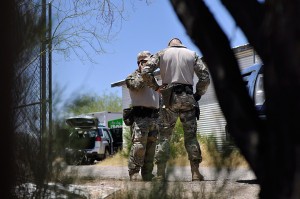 The FBI would not comment on the raid, which involved more than 30 vehicles, including an armored car, or on the investigation.

Sgt. Maria Hawke, a Tucson Police Department spokeswoman, said she had no specific information on the raid, nor would she say if there were any arrests.

A cook at the Wooden Nickel Tavern nearby said that she spotted one man on a roof. Officers drew their weapons, ordered him down and arrested him just outside the tavern, she said.

“He was hiding by the shed,” said the woman, who declined to give her name. “The cops told the guy to hold still. They had guns pointed at him.”

Just across the street from the scene, Steve Van Houten, vice president of operations at Copper State Communications, watched some of the action from his office, as the company’s property became the staging area for the raid.

“Our back lot was set up with Tucson police, SWAT teams,” Van Houten said, adding that at least 50 officers were on the scene.

Investigators huddle together after FBI agents and local police conducted a joint raid on Thursday in the Julia Keen section of Tucson. Anibal Ortiz | NYT Institute

“We were trying to be normal as could be with people in Kevlar on their backs and pistols on their thighs,” he said.

Officers from several agencies arrived at 5 a.m., he said, and just after 9 a.m. they moved across the street. Van Houten said he then went back to work and didn’t see the operation itself.

Sergeant Hawke noted that multidisciplinary operations are often narcotics busts spearheaded by the Counter Narcotics Alliance, a multiagency task force that includes local law enforcement agencies throughout Pima County, as well as federal agencies like the FBI, DEA and Customs and Border Protection.

Van Houten said he was glad it was over.

“When you have people with guns at a corner where you’ve worked for over 30 years, it’s unnerving,” he said. “But they planned it so well that it seemed to happen without incident.”

Some residents in the neighborhood, just north of the Davis-Monthan Air Force Base, said they heard a loud bang that morning, though none of them could tell what it was. 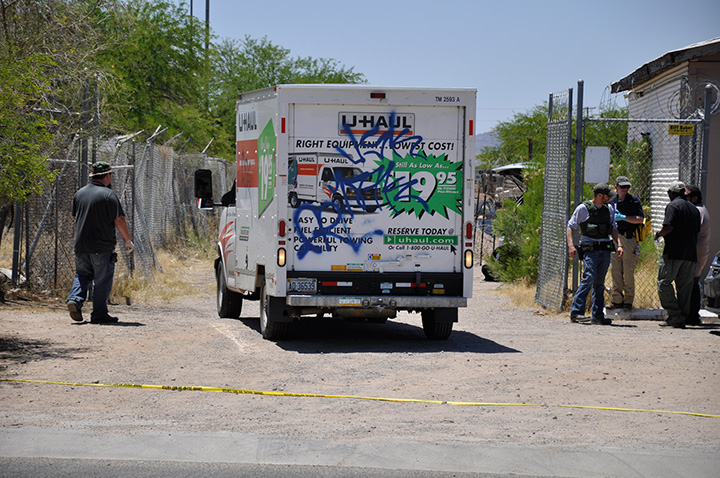 A U-Haul truck being driven out the area where the FBI and local agencies conducted a raid. Anibal Ortiz | NYT Institute

Luis Enriquez, a neighbor, said his wife heard the commotion.

“I came home from work and my wife said, ‘I heard a bang just a minute ago!’” Enriquez said, as he pulled his two daughters, both toddlers, out of his car.

Asked if he still felt safe, considering the proximity of the raid to his home, he said, “Yeah, man. This guy here protects us,” and pointed to his pit bull. “His name is Scarface.”