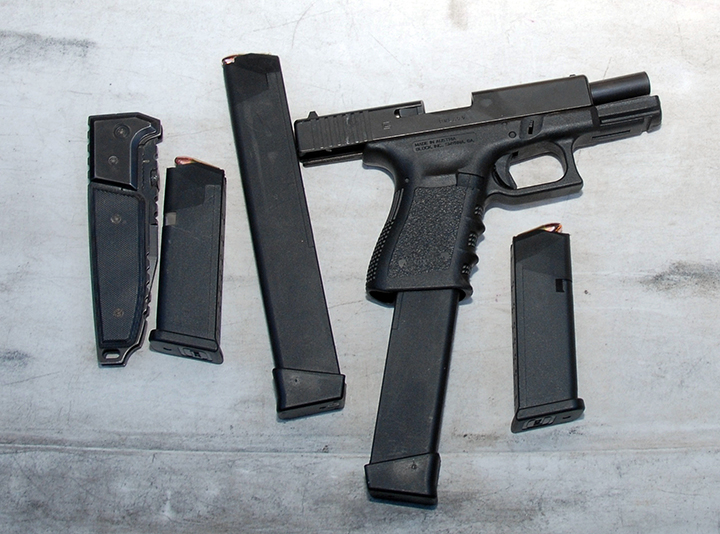 The Pima County Sheriff’s Department has released nearly 600 crime scene photos from the Jan. 8, 2011, mass shooting in Tucson, Ariz., that injured Rep. Gabrielle Giffords. The photos included the Glock 19 that the gunman, Jared Loughner, used to kill six people and wound 13 others.

The photos, released on Tuesday, retraced law enforcement officials’ steps as they pieced together Loughner’s actions just before the shooting: the Motel 6 room he checked into the night before the rampage, the interior of the cab that drove him to the shopping center and the bloodied pavement outside the Safeway, where he opened fire during a constituent meet-and-greet event hosted by Giffords.

Loughner’s weapons lay side by side in one of the photos — a switchblade next to an unloaded pistol and three fully stocked magazines.

During the attack, Loughner emptied one 33-round magazine into the crowd. A second magazine jammed, giving bystanders a chance to tackle him before the first police officers arrived.

The photos also show some of the cars parked on the lot where the shooting occurred, and Loughner’s motel check-in card with a note scrawled on top that read, “Checked in at 12:29 a.m. Don’t know when he left.”

Tuesday’s release marked only the second time the sheriff’s department has made public evidence gathered during the investigation. In March, it released more than 2,700 documents, including police reports and interview transcripts that shed light on Loughner’s family life and his troubled times as a community college student.

In August, Loughner pleaded guilty to 19 counts of murder and attempted murder.

U.S. District Court Judge Larry Burns granted the release of the documents following a request by the Arizona Daily Star’s publisher, Star Publishing Company; Phoenix Newspapers Inc.; and KPNX-TV. Burns ruled that Loughner’s right to a fair trial was no longer at risk since his criminal case had been resolved.

Giffords and her husband, Mark Kelly, a former astronaut, made no statements about the photos’ release.

Giffords was shot in the head and gravely wounded during the rampage, which killed Christina-Taylor Green, 9, and Arizona’s chief federal judge, John M. Roll. The bullet left Giffords partially blind and paralyzed on her right side. She later resigned from Congress.

She has testified in Congress and spoken passionately for tougher gun control laws despite her difficulties in articulating words, a lingering effect of her injuries. She and Kelly started a gun control advocacy group called Americans for Responsible Solutions.

In pleading guilty, Loughner was spared the death penalty and will, instead, spend the rest of his life behind bars.

During the sentencing, Kelly addressed him directly:

“Mr. Loughner, you may have put a bullet through her head,” he said of Giffords, who was standing by his side, “but you haven’t put a dent in her spirit and her commitment to make the world a better place.”