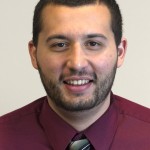 The spark that started Amer Taleb’s interest in journalism occurred during a childhood stay in Lebanon, his father’s birthplace.

He was 9 years old at the time. Seeing men, near death, begging for food was a transformative experience for a boy born and raised in Tucson.

However, it was not until he was a freshman at the University of Arizona that he realized journalism gave him the perfect platform.

“Being able to inform people and empower them is a sacred thing to do,” Taleb said. “Anyone, journalist or otherwise, who can do that has been entrusted with an incredible opportunity.”

Taleb, 21, was born to a Mexican mother and a Lebanese father. As a first-generation American, Taleb said his drive comes from a desire to make his parents proud.

“Knowing how hard my parents worked and all of the sacrifices they’ve made, it makes me more driven,” Taleb said. “I think they see a lot of themselves in me, and to make them happy, that’s worth it.”

While in college, Taleb started two local blogs, worked for the school paper, and completed three internships, including one with the Scripps Howard Foundation Wire in Washington, D.C.

This summer he will intern with CNN in Atlanta before returning to Arizona for his senior year. In the fall, he will be an intern for The New York Times’ bureau in Phoenix, as well as a reporter for the Arizona Daily Star.

While at The New York Times Student Journalism Institute, Taleb is researching the dog racing industry in Arizona and its decline.

“It’s a possibility that this industry will be extinct, that it won’t happen again,” Taleb said. “I have the chance to capture that and record that in its final days.”

Whether he is working in print, radio or broadcast, Taleb said it’s not about the medium, but the message.

“I can’t be an activist out on the streets, but I can wake people up and say this is important and this is how it affects you,” he said.