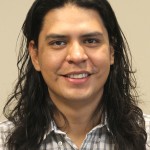 For most of his childhood, Kristian Hernández lived with his grandparents in Juarez, Mexico, a place he remembers fondly, even as he is grateful to have made it out of there.

Hernández, 26, described his neighborhood as a place where close-knit families kept watch over the swarms of children playing carefree in the streets, sharing skateboards until dark.

But his generation, he said, was the end of an era. Those who could leave the borderland did so. Those who stayed eventually fell under the influence and violence driven by the drug cartels, including killings.

“All those bodies are kids that were my age,” he said. “They were probably kids that I used to play with.”

When he was 9, Hernández joined his mother in El Paso, Texas, where he said he felt out of place amid the more privileged students in his new school.

“That was the biggest shock to me,” he said. “How from one side of El Paso to the other could be like a different world.”

In high school, Hernández was disillusioned. But in his junior year, he met a girl named Danya in guitar ensemble class.  He walked her to her next class. They were soon inseparable — marrying not long after high school, and now attending this year’s New York Times Student Journalism Institute together.

After taking classes at community college, Hernández began developing his writing skills at the University of Texas-El Paso, where a professor encouraged his writing.

Since 2009, Hernández has contributed to Borderzine, a multimedia magazine, where he has explored his own roots through journalism. He has interned at Hispanic Link news service in Washington D.C. and The Star Tribune in Minneapolis, where he was sponsored by the Scripps Howard Foundation.

This May, Hernández earned his Bachelor of Arts in multimedia journalism with a minor in creative writing.

Hernández said he allows his experiences to guide his reporting.

“I feel like I was shown those things for a reason,” he said. “It was necessary for me to go through all that to be the person that I am today.”