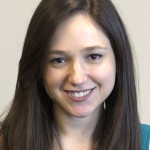 The New York Times Institute had barely begun, but Arielle Dollinger had already made an impression.

When questions were asked of the students, her hand would inevitably be among the first to be raised. And when the Institute’s director, Don Hecker, sought to use a student to illustrate a point, he gestured in Dollinger’s direction.

What rolled off from Hecker’s lips was not her name, but where she was from: “Long Island,” he said, and that was enough. Everyone in the room knew whom he was referring to.

But no nickname or label would be adequate to describe Dollinger’s work ethic.

Her journalism credentials include a stint at her high school paper in Dix Hills, in Long Island, N.Y.; internships at three local news organizations. While interning at NY 1 Noticias she shocked reporters there with her fluent Spanish, belying the fact that she is of Eastern European descent. The day after she gets back from the Institute, she’ll start as an intern at CBS This Morning: Saturday.

Picking up her water bottle from the table and putting it on the table, Dollinger, 21, clapped her hands, grabbed the bottle and tossed it in the air, singing. “When I’m gone, when I’m gone, you’re going to miss me when I’m gone.”

“I know a lot of useless things,” she said.

While she always wanted to write, at 13, she imagined she would become a lawyer, like her father. When she told him that, he had a quick answer.

But some of her childhood ambitions have remained; she said she used to dream of one day living in New York City.

She wrote a poem with different vignettes, each a slice of life as if peeking through a New Yorker’s window.

She wrote the poem for the same reason that she now writes news, she said, finding herself drawn to “really ordinary things that people don’t normally think are beautiful.”