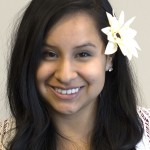 Marina Villeneuve was 17 years old when she first saw a picture of her biological mother. The orphanage director in Bogotá, Colombia, pulled out a manila folder that had been filed away since she was 6 months old, when her young mother gave her up for adoption.

“I realized that she did it so that I could have different opportunities,” said Villeneuve, 22. “I want to make her proud and make it worth it.”

Maryann and Ron Villeneuve raised their daughter in a middle-class home in Tewksbury, Mass. Her younger brother, Josef, was also adopted from the same agency in Colombia. Her parents, who are both white, encouraged her and her brother to embrace their heritage. But living in a small town like Tewksbury, where more than 96 percent of the population was white, this did not come easily.

“I remember in first grade not wanting to seem different from anyone else,” she said.

Often, kids would wonder why Villeneuve looked different from her parents.

“Someone asked me a question about it,” she said, “and I said that my mom was tan when she had me.”

Today Villeneuve is happy to stand out and embrace her heritage. She wears a friendly smile and colorful flowers in her hair.

When she walks down the street, she thinks about the fact that everyone has a unique personal history, and she hopes to use journalism to tell their stories.

In high school, she started her own underground paper with 12 of her friends.

“I felt like people on the radio were just yelling at each other,” Villeneuve said. “My local paper was not reporting on issues I thought were important.”

Through internships at newspapers in Massachusetts, Long Island and in Washington, D.C., Villeneuve found her own voice as a Latina journalist covering issues dealing with discrimination and civil rights.

She is a senior at Dartmouth College in New Hampshire and expects to graduate June 9 with a major in politics.

Villeneuve wants to be an investigative reporter.

UPDATE: This post has been updated to correct the name of her brother to Josef, instead of Joseph.