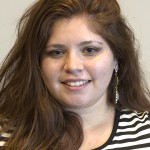 Monivette Cordeiro has a skillful background in reporting, producing and design. With a passion for politics, linguistics and Mexican American culture, Cordeiro, 20, shares a rich connection with her target audience: the Latino community.

Cordeiro currently co-anchors and coproduces a weekly Spanish 30-minute show on Florida’s 89.1 WUFT-FM at the University of Florida, where she will be working all summer and where she has reported on breaking, investigative and diversity stories. She has also been a news reporter for The Gainesville Sun in Florida, where she covered city government, education and crime.

Cordeiro said she has found that being a compassionate journalist is a fundamental responsibility.

“When you practice giving compassion to a subject not only do you come out with better stories,” Cordeiro said. “But there is also a deep connection that develops when you are mindful of their own humanity.”

Cordeiro is expected to earn her Bachelor of Science in journalism this summer from the University of Florida College of Journalism and Communications. She will intern with the Future Journalism Project in New York, where she will work with the Latin-American chapter.

Born in Azusa, Calif., Cordeiro intended to earn a degree in psychology, but realized that would limit her ability to explore different areas of study, she said.

Cordeiro’s interest in Latin American history and culture revolves around her Hispanic-influenced ethnicity. Her mother is Mexican and her father is Cuban.

When she isn’t out working and reporting, Cordeiro likes to spend hours on Wikipedia and Tumblr looking up random historical facts.

As a child, she gained a strong interest in studying the unsolved mystery of princess Anastasia and her family.

“I used to think I was nosy for doing so,” Cordeiro said. “Now I know it’s my own curiosity as a journalist, and somehow everything I did then and do now connects to journalism.”