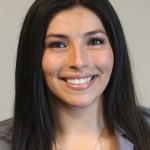 Griselda Ramirez found trust in a bathroom stall. One night, as a reporter for The Salinas Californian, she and a photographer stopped to eat after covering a SWAT team capture gone wrong. A man, wanted in relation to a shooting, had been killed in his home the day before. Ramirez went to use the bathroom, when she heard a woman weeping. She knocked on the stall to see if the woman was all right. She explained that her boyfriend had been killed. The same wanted man in relation to the shooting. “I feel like the news follows me,” Ramirez said. The woman told Ramirez her story about the kids the man left behind and her sense of disbelief. She even apologized for yelling at the photographer.

“It’s those situations: If someone can trust you,” she said, “you’re meant to do what you do.” While Ramirez was growing up in the agriculture-rich city of Salinas, Calif., about 100 miles south of San Francisco, her mother kept her and her sister safe within the walls of their home. Her parents, immigrants from Mexico, worked in the lettuce fields of California to create a better life for their family. “She wouldn’t even let us play in the front yard,” she said, laughing. Her mother was scared of the gangs that were known in the small town. After years of soccer, yearbook and newspaper staff throughout high school, she attended Santa Clara University, where she majored in marketing and Spanish studies. When she graduated, she went back to journalism and worked for a local Univision station and then at her hometown newspaper. Now, as a recent graduate of Columbia University with a master’s in journalism, Ramirez, 26, is back in the job market. She hopes to cover Latin American issues through broadcast, whether in front of the camera or as a producer. No matter where she ends up, her mother will remind her how proud she is, even through comments on Instagram. “She’ll comment and say: I’m so proud of you, daughter ‘exclamation mark.’ Love you.”