As the sun rose at the Madera Village Shopping Center, a flock of bicyclists in neon spandex circled a portion of an otherwise empty parking lot in Northeast Tucson.

At 5:30 a.m. on any given Saturday or Sunday, hundreds of bikers begin to arrive in the plaza to traverse the winding Catalina Highway, passing leafy mountain forests and canyons spilling out into broad deserts.

“It’s got a tree miles up, and with the sun at your back, you can see the rocky shafts of Mount Lemmon,” said Bob Wickliffe, 62, an engineer who bikes with a group of Raytheon co-workers.

Click on markers to see photos along the route

“You go through about four different climates as you bike up,” Wickliffe said, noting the quick changes in elevation, which ranges from 3,000 to 9,000 feet.

Before their rides, cyclists meet in the parking lot in front of Le Buzz Café, most of them returning for pastries after the ride.

“It’s a whole cycling community, everyone helping each other out,” said Jennifer Jen, an accountant who has biked for the past three years. “I started off as a runner and took up cycling. We’re a pretty random group of people, all different.”

They have a lot of choices for their rides. Tucson was recently ranked as America’s most bike-friendly area, beating Minneapolis and Portland, according to The Atlantic. 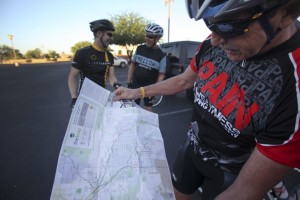 Bob Wickliffe, 62, reviews a map of biking routes with friends before heading toward Mount Lemmon in Tucson, Ariz. He's part of a group that rides every weekend. Elaine N. Cromie | NYT Institute

Of the 7,000 top neighborhoods in the U.S., three from Tucson made the top 25: Pie Allen at No. 9, Iron Horse at No. 18 and Armory Park at No. 22. The Atlantic analyzed WalkScore.com’s rankings based on bike lanes, hills, destinations and road connectivity, and bike commuting.

“There’s a lot that can be done with driver education,” he said. “People in the U.S. know little about other users in the road and that by being in a car, you have a responsibility to be aware of bikers, pedestrians and other users on the roadway.”

Few bicyclists are dissuaded by Arizona’s heat in May. Temperatures can reach close to 100 degrees during the day, prompting some to set out earlier to bask in the coolness of 60-degree rides.

Lorna MacQuarrie, 55; Rick Taylor, 50; Andy Rothschild, 51; and Wickliffe use an email list to organize their group of a dozen bikers, though only five to seven typically show up.

Preparation is essential, said MacQuarrie, a manager at Sabino Cycles.

“You hydrate before you go, and you drink and eat water and get a lot of sleep the day before,” she said. “You need electrolytes, because plain water will just flush you out.” 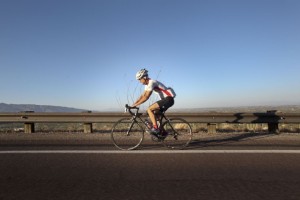 Nearby, Lisa Abramson, 56, did calf stretches while waiting for a friend.

Abramson said she hoped to spot the full moon before it disappeared.

Patrick Sisson, part of the group, moved to Tucson in 2006 and bought his first bicycle a year later.

“I quit smoking and thought I would make it up Lemmon Mountain the first day,” Sisson said. “Well, I couldn’t. A 14-year-old flew by me. It’s part of my lifestyle now.”