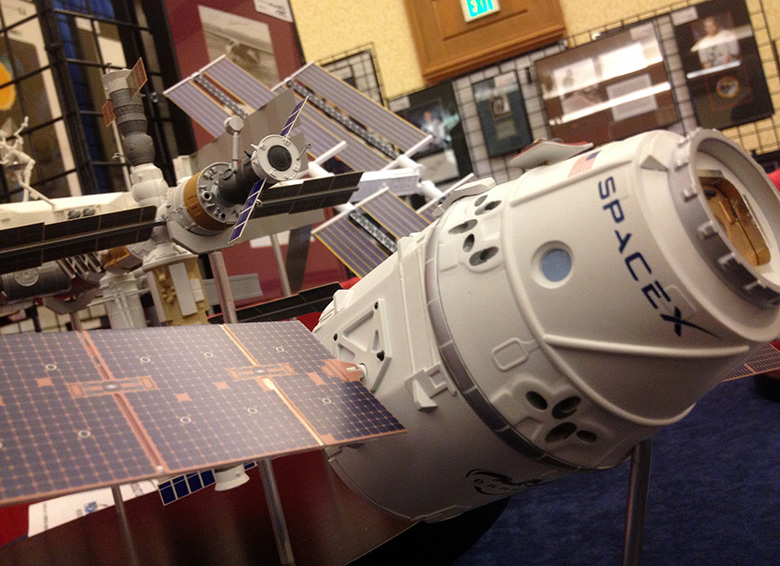 Models of the International Space Station, rear, and a Space X shuttle are shown for sale at the Spacefest V convention, held over the Memorial Day weekend in Tucson, Ariz. Joseph A.W. Fitzgerald | NYT Institute

Americans’ interest in space travel has waned from the days where millions gathered before their TV sets to watch the first humans set foot on the moon. But in a conference center nestled in the hills west of Tucson, Ariz., fans gathered to celebrate that past and talk about the future of human space flight.

At Spacefest V, an annual convention that celebrates all things space, astronauts signed autographs, scientists gave lectures, and artists displayed paintings. There was even jewelry made of meteorites for sale. One could buy a 1/48-scale model of a Saturn V rocket — for $7,995.

Spacefest, held at the Starr Pass Resort over Memorial Day weekend, contrasted NASA’s heyday, when President John F. Kennedy gave America a mission to land on the moon, and today, when the agency relies on private companies to deliver payloads to the International Space Station.

“Our entire way of life depends on space,” said Heather Archuletta, a self-described “pillownaut” who spent 54 days in bed as part of a 2008 NASA experiment to evaluate how human physiology would fare on a trip to Mars.

“Satellites don’t get up there by accident. You have to design rockets to put them there,” said Archuletta, 43. “We’re a spacefaring world whether you like it or not.”

Tom Taormina, a quality control engineer at NASA during the 1960s, said he thought the current generation has a lot to learn from the Kennedy era.

The president’s challenge to land a man on the moon spurred a young Taormina to join NASA.

“When Kennedy said we’re going to the moon, I moved down from New York to Houston, and didn’t know a soul,” he said.

Since then he’s become disillusioned, and it’s easy to see why.

The space shuttle fleet has been mothballed, and budget cuts have stalled smaller projects, including a trip to find life on Jupiter’s moon of Europa. NASA’s proposed fiscal 2014 budget includes a cut of $178 million.

Instead of focusing on manned missions to Mars, the agency has refocused to shorter-term goals like landing astronauts on an asteroid — with an eye toward mining.

Taormina said that the dream of space travel is in decline, and that the world is devoid of visionaries who can spark the nation’s interest in space.

He said he hoped to capitalize on the leadership skills of his generation with his consulting services, which he named the “Apollo Business Model” — reaching for goals that others may think impossible.

Across the ballroom from Taormina’s booth was a space art exhibit with paintings of planetary vistas, real and imagined. One of the artists, Dan Durda, is part of the next generation of astronauts who hopes to travel to space in a public-private partnership with NASA.

Durda tried the traditional route first and was part of NASA’s class of 2004. He didn’t make the cut but has continued to prepare for space travel. He holds ticket No. 243 on Virgin Galactic’s anticipated commercial space flight, which is not scheduled yet, and plans to pilot crafts for Virgin and XCOR Aerospace.

“I have to remind myself ‘Hey, by the way, I’m going to space,’” Durda said. “I want to get that sense that I don’t just live in a city, I live on a planet. I want to see it with my own eyes.”

“I get this sinking feeling like. God, what if I’m 88 years old and it still hasn’t happened?” she said. “What if I have to die wondering if it will?”