Helen Anderson Glass joined the Navy in 1943. It was her 20th birthday, and her first time away from home.

Glass was motivated to enlist partly because her father and her brother had already been killed in the war.

In the Waves, the women’s branch of the Navy, she became an aviation machinist mate.

On Monday, Memorial Day, Glass, now 90 years old, spoke and read a poem at services attended by about 200 people at Evergreen Mortuary Cemetery in Tucson, more than 72 years after she donned a uniform in a long-ago war.

These days, as the ranks of World War II veterans thin with age, she volunteers at the Veterans Administration Hospital and says she feels the need to pay tribute to those who are gone.

“I never knew how much I had done until I had to speak at a school,” she said, her light blue eyes shining.

That speech, a few months ago, led her to reflect on her accomplishments. “The principal told me, ‘I wanted to show these young people what an old lady can do.’”

“I don’t think you’re going to find too many other World War II veterans around here anymore,” Ray Carroll, a Pima County supervisor, said at the cemetery on Monday.

He looked past Glass to the rows of tombstones, adding, “The ones that are here are here forever.” 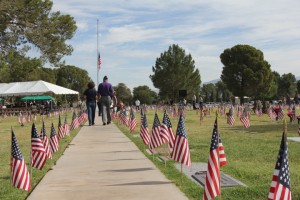 A couple walking toward a Memorial Day ceremony at South Lawn Cemetery in Tucson, Ariz., where many gathered to pay respects to those who died while in military service. Alex Wroblewski | NYT Institute

As these veterans fade, so fades taps, the tradition of the 24 notes played by buglers at military funerals. Because of the shortage of buglers, the military approved the use of an electronic bugle-like device that plays a recording of the musical piece.

“I get upset when the military uses the recording,” said Hoffman, 82. “It feels good when you know you’re playing this for these guys who did so much.”

Barry Romitti, 46, an Air Force veteran, began playing the trumpet when he was in the sixth grade.

He has been in high demand in Tucson ever since veterans found out he could play taps.

“It’s kind of become a standing expectation now that I’ll be there every year,” said Romitti, who also makes time to train a new generation of buglers.

“I made sure I have a replacement and a spare,” he said. “I’m teaching my son and nephew how to play so they can do it at my funeral. I really want to have that.”

Frances Gilpin, 80, remembered her fallen in the Memorial Day service at South Lawn Cemetery — including her husband of 40 years, a World War II veteran who won three Purple Hearts.

He died 10 years ago, and although he isn’t buried at the cemetery, she comes out each Memorial Day to support the veterans of Tucson.

As Gilpin talked about her husband, a friend placed her hand on Gilpin’s shoulder. “We just keep getting older,” her friend said. “We’re fading away.”

Back at Evergreen Mortuary Cemetery, a father and his son introduced themselves to Ken Johnson, who was using a large oxygen tank on the back of his red scooter.

“This is my son, David,” the father said. “We’re so happy to see you. Thank you for your service.”

Johnson’s hands trembled in his lap, but when the 81-year-old veteran of the Korean and Vietnam Wars saluted the pair, his hands did not shake.

Johnson laid down a red, white and blue wreath.

He said he’ll keep putting flowers on graves until someone has to do it for him.