From Behind the Lens of the Universe

Inside one of the control rooms at the Kitt Peak National Observatory, Flynn Haase tried to realign the 0.9-meter telescope to match the exact coordinates of the universe with those that have already been recorded by scientists.

He made some small adjustments and saw that the coordinates were only slightly off — a few thousand light-years, mere inches on one of his monitors.

It was just another night on the mountaintop, checking in on the universe. 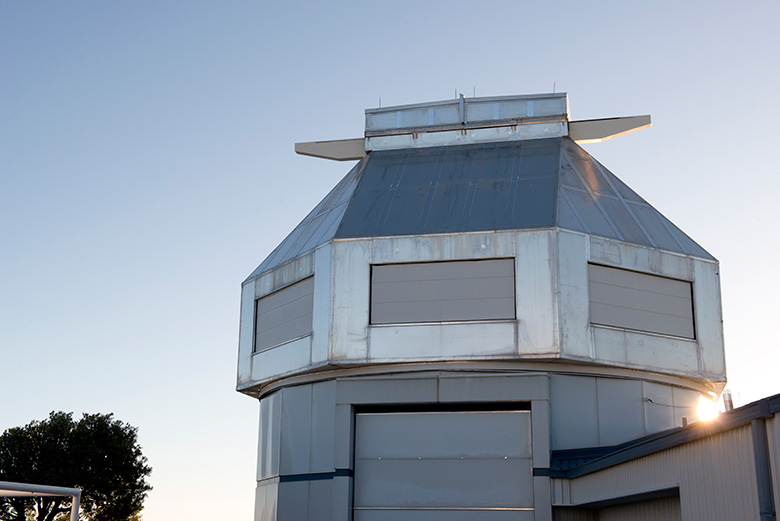 Haase is the site manager for the WIYN 0.9-meter telescope. He pointed to some posters on the wall: Glossy prints of galaxies, familiar from any grade-school science lab.

“All the photos taken,” he said, pointing, “are from this telescope.”

Since Kepler and Galileo, the grandfathers of modern astronomy, first used telescopes to look at the night sky, the image of an astronomer has been someone at the far end of a telescope, gazing skyward.

But with advances in digital technology that’s changed.

Consider Chuck Dugan as he finishes his twice-a-week public tour for visitors at Kitt Peak National Observatory. He invites those in the group to do something that most astronomers don’t actually do anymore: squint at the universe through the lens of a telescope.

Dugan, a site coordinator and observatory guide for National Optical Astronomy Observatory on Kitt Peak, explained that advances in technology have taken astronomers from behind the lens to the world of digital images.

The observatory, built in 1958 on the Tohono O’odham reservation 56 miles southwest of Tucson, is the largest collection of research telescopes in the world.

Timothy Beers, the director of the NOAO at Kitt Peak, said, “What is really changing is the way astronomical community as a whole is using the instruments.” 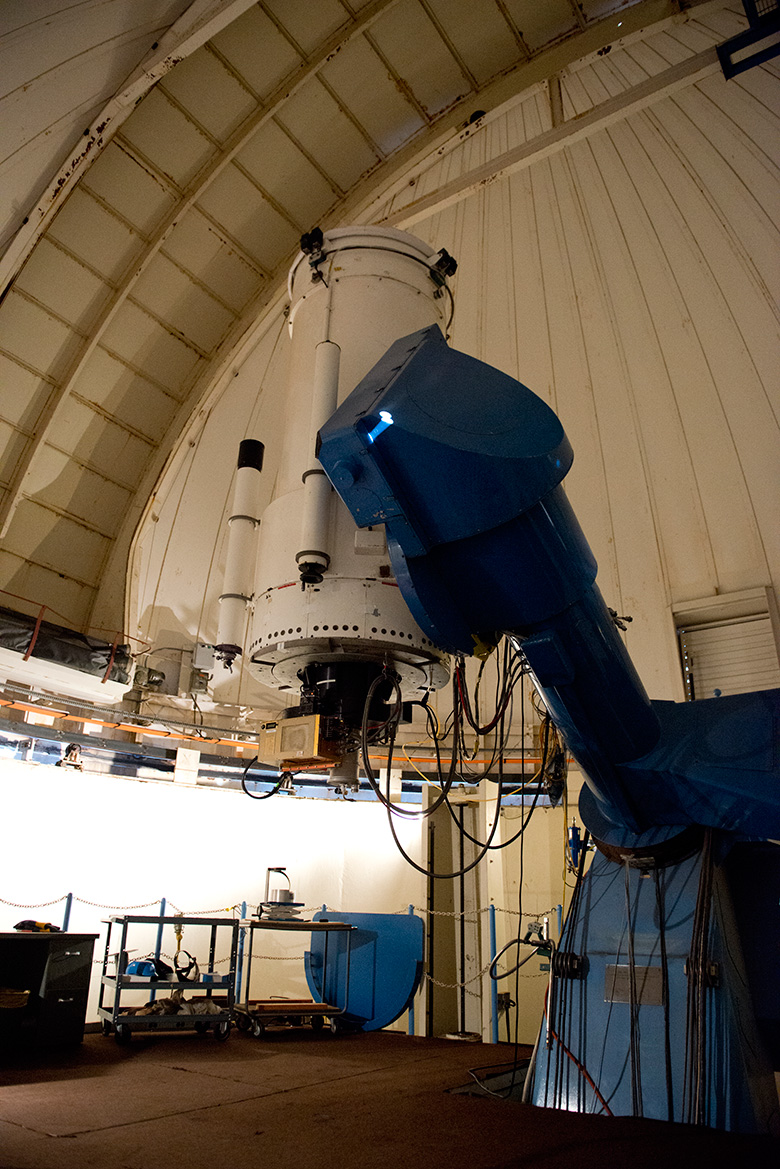 The WIYN 0.9 telescope at Kitt Peak. The observatory site was chosen because of its dark skies, and opened in 1958. Molly J. Smith | NYT Institute

Although Kitt Peak has telescopes decades old — some of the oldest date to the 1960s — the observatories accounted for the discovery of galaxies and continue to gather data about the sun and dark matter.

The idea of “if it ain’t broke, don’t fix it” holds true for the telescopes. They don’t replace the older models; they just add new technology. Newer telescopes tend to be lighter than the older models, which “were built like battleships,” he said.

The way it works is this: Telescopes capture celestial images. With digital technology, the data and images can be stored and evaluated — on site or later, for specific research. The observatories also collect general data, which can be made available to astronomers anywhere for any research purposes.

Despite a threat of funding cuts from the National Science Foundation, Beers said he isn’t too worried. The funding issue is just a recommendation and is not set in stone yet. Plus, he added, Kitt Peak’s location plays a key role in the demand and uniqueness of the observatory.

At nearly 7,000 feet atop the Quinlan Mountains, miles from urban sprawl, the observatory is prime real estate for astronomers.

Save for the flickering glint of Tucson’s city lights, a distant highlight on the horizon, and the occasional wandering patrol car tracing the outlying roads of the border with red and blue flashes, the only noticeable light is found by looking up into the night sky.

When a search committee looked for a suitable place to build the National Observatory, Kitt Peak fit all of the parameters: Year-round near-perfect weather, an elevated and remote area and most importantly, dark skies, Dugan said.

The International Dark-Sky Association, headquartered in Tucson, said while the light pollution from the city has increased since the 1950s, it has not grown as much as might be expected considering the population boom.

The light that astronomers actually worry about is the moon, Dugan explained. At its peak, the full moon, or even a nearly full moon, illuminates the domes so much that it can distort the data taken at night.

Even Dugan’s polo shirt, with a stitched Kitt Peak insignia over the pocket, has a dome, tiny stars and the sliver of crescent moon, depicting a near-ideal night for collecting data from the telescopes.

Telescopes on the peak range in size and science. And fame. 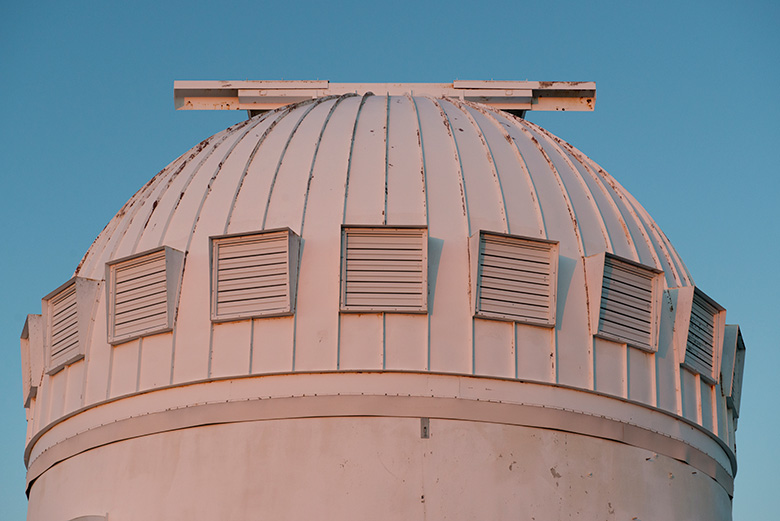 The WIYN 0.9-meter observatory is popular because of its wide field of view. Most telescopes now use digital imagery, though visitors can still gaze though the lenses on tours. Molly J. Smith | NYT Institute

The National Optical Astronomy Observatory operates four of the 27 telescopes on Kitt Peak. Other telescopes on the mountain include radio telescopes, a telescope operated by the University of Arizona and the largest solar telescope in the world, the McMath-Pierce Solar Telescope.

Dugan said it is used not only to observe the sun but also to look at bright stars elsewhere in the universe. Rising 100 feet, with a chute that descends 200 feet, and then even more underground, it directs the light and then reflects it below, between multiple mirrors.

Inside, a rollercoaster-like track leads from depths underground to the top, with a circular mirror running back and forth, depending on where the astronomers want the light to go.

At 18 stories high and with a mirror 4 meters wide, another telescope, the Nicholas U. Mayall Telescope, the largest on the peak, can be seen from the road on the desert floor well before drivers reach the base of the mountain. At sunset, its shadow chases the horizon, slowly creeping over the Tohono O’odham reservation, growing until it reaches the distant city limits of Tucson.

Some of the discoveries from Kitt Peak include the first indication of dark matter, a better understanding of the rate at which galaxies are formed, and some new understandings of how galaxies have evolved in the universe.

But it’s the discovery that visitors find on their first time to the mountain that means the most to Dugan.

Though visitors will ask for a view of the moon through one of the smaller telescopes, Dugan said his “big finish” is pointing the telescope at Saturn or sometimes Jupiter.

A clear night will give a crisp view of the rings and of Saturn’s largest moon, Titan, still just a bright speck at more than 744 million miles away from earth.

Many have never seen the planet other than on a middle-school science poster.

He said the short gasp and the low mumbled “Oh, my god” never gets old for him when their eyes finally focus.

Once he had a small group whose members barely spoke a word of English, “I think the guide spoke even less,” he joked. One young woman in the group went to look through the lens, like those before her, and said:

“I can’t ever leave this place because it’s so beautiful.”

It brings him back to the first time he saw the ringed planet as a teenager, a feeling of ownership and wonder he relives every time someone on his tour sees it for the first time.

“Other people will tell you they discovered Saturn,” he said. “But I found it in 1978.”