It’s 10 p.m. and Deputy Tom Peine has just turned in for the night. After a slow day at the office, he’s expecting a quiet evening to follow. But his phone rings. An officer is involved in a shooting, and Peine is needed at the scene.

But this will be one of his last calls.

After a year as the public information officer for the Pima County Sheriff’s Department, and eight years on the force, Peine is moving on.

As the spokesman for the department, Peine is on call 24 hours a day, 365 days a year. When there is potential media interest in a crime, he is called to the scene to coordinate with command staff and determine what information can be released to the public. 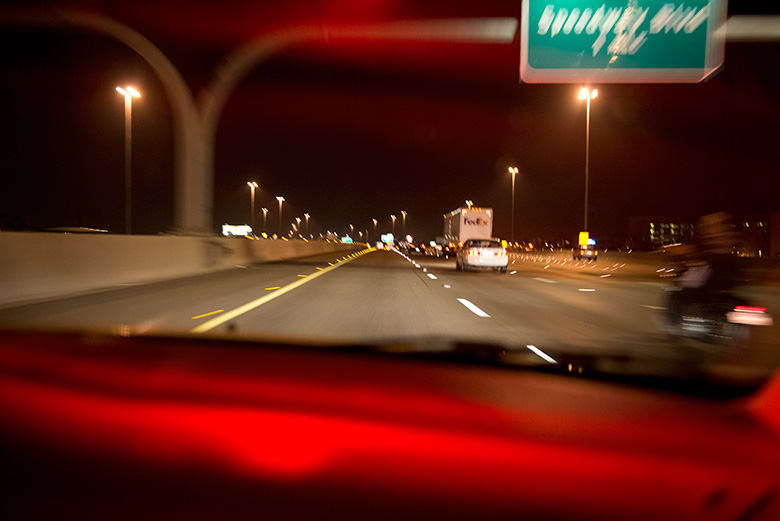 Deputy Peine speeds along Interstate 19 in Tucson, Ariz., to reach the scene of a shooting involving an officer. As a public information officer, Peine can be called out to any scene at any time when the media are interested in what has happened. Molly J. Smith | NYT Institute

“Unfortunately, many times we deliver bad news,” Peine said. “But it has to be reassuring and give people confidence that the right people are handling it. It’s very meaningful work, but very tough.”

Last week, Peine handed off the position to Deputy Jesus Bañuelos, a detective in robbery and assault. Bañuelos will be the lead spokesman, and will rotate on-call duties with Deputy Tracy Suitt every two weeks.

Although many late-night phone calls could take their toll, it’s not that Peine is tired. He’s moving to England after his wife was offered a job there.

Born and raised in Germany, Peine moved to the United States in 2001, when his American wife was offered a job in Boston. Though he had teenage aspirations of becoming a police officer and completed two years of mandatory service in the German military, Peine spent much of his professional career as a global account manager in the banking industry.

On Sept. 11, 2001, he was headed to the World Trade Center for a meeting with a client. A last-minute schedule change meant he wasn’t in the building when the planes struck, but the coincidence stuck with him for years.

His chance to join law enforcement came four years later, when he moved to Tucson. While browsing the local paper, Peine saw an ad for the sheriff’s department. 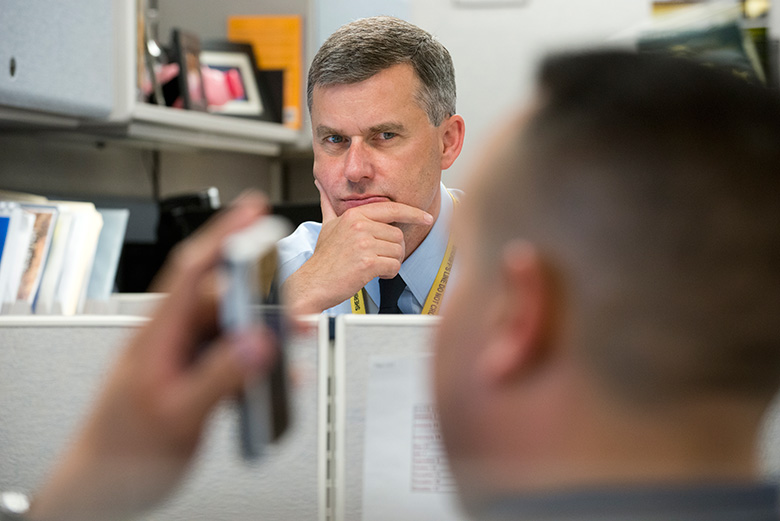 Deputy Peine watches Deputy Bañuelos on a call with a woman who may have been the victim of an attempted purse snatching. Public information officers at the Pima County Sheriff

Remembering his childhood fascination with police officers and his close call on 9/11, Peine saw an opportunity to serve his community. At 40 years old, he entered the academy—a process he describes as “physically painful” —and spent four years as a deputy on patrol before working as a detective in financial crimes and then crimes against children.

And, as deputies, they can also respond to crimes when the need arises; Peine still carries flares, handcuffs and weapons in his trunk.

Given the delicate nature of the job, the position is handpicked from within the organization. Officers with the right mindset and a comfortable relationship with the command staff are sought after.

“This job is so much about relationship management,” Peine said. “I don’t know if that was always so important. But the ‘us versus them’ mentality doesn’t get anyone anywhere. It doesn’t work for reporters, and it makes the department look uncooperative.” 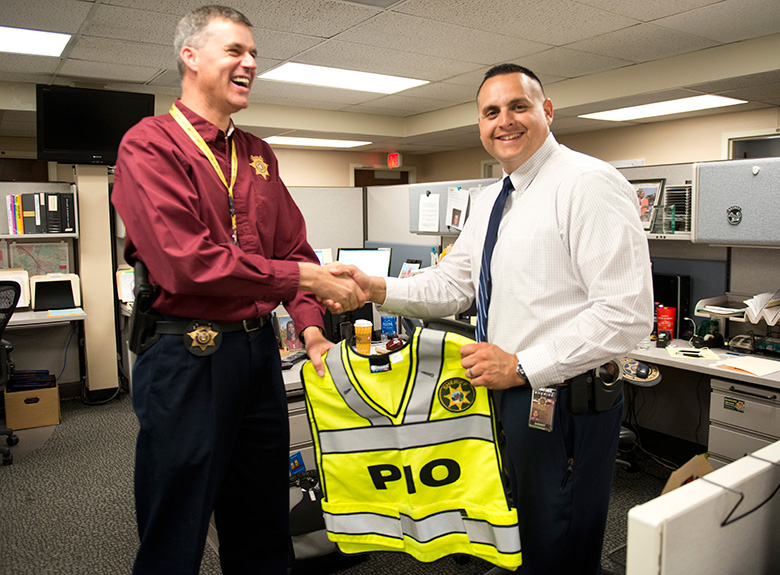 Deputy Tom Peine, left, hands a public information officer jacket to his successor, Deputy Jesus Bañuelos. "We had similar philosophies about the sheriff

Peine’s open approach to communication is part of what drew Deputy Bañuelos to the job. He met Peine while working a case and found they had a lot in common.

“We had similar philosophies about the sheriff’s department and the media,” Bañuelos said. “I knew that if anyone else took the job they might not have the same ideas as Tom and I, and we might take a step back in terms of our relationship with the media and the public.”

Peine said he has mixed emotions as he leaves the sheriff’s department. Peine doesn’t yet have a job set up in England, but he knows he would like to continue working in a field where he can relate to people.

But he will no longer go to bed wondering if he’ll be called to a crime scene in the middle of the night. He won’t worry about telling his wife and son what to do if he encounters a criminal while on a family outing. But he will miss the sense of duty that comes with the job, and the good work he feels he accomplished.

“There is no money in the world you could make with another job that could provide this.” Peine said. “I’ve always felt that in any kind of public, outward-pointing position that you represent not just yourself, but something you can believe in. And I wholeheartedly believe in this agency.”