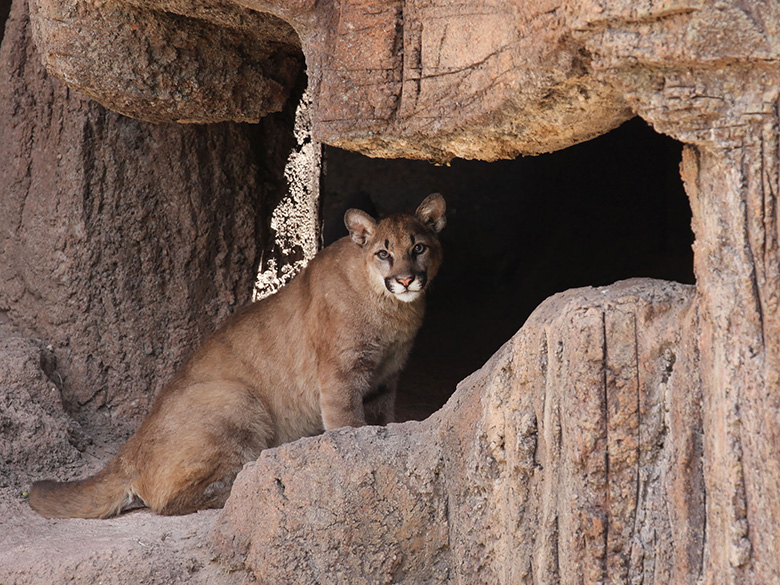 Out With the Old Lions, In With the New

King of the Desert

As visitors made their way through the winding, sandy paths of Tucson’s renowned outdoor zoo, something was missing — the zoo’s longtime mascots, a pair of mountain lions.

Children peered around the exhibit searching for the animals. Visitors leaned on the fence, lifting their children to get a better look at what the seemingly empty exhibit held. One child ran after her mother, yelling “there’s nothing in there!”

The sibling mountain lions that delighted crowds for 13 years have been forced into retirement by arthritis and replaced by a cub, almost 6 months old, that was abandoned in the California desert. The zoo’s male mountain lions usually are called George L. Mountainlion, but the zoo plans to retire the name with the animal. The public will name the new cub via an online contest.

The mountain lion exhibit at the Arizona-Sonora Desert Museum, which is a zoo, natural history museum and botanical garden, has been empty since March, when the iconic animals were placed in their retirement digs, overlooking Kings Canyon Trail and out of the public eye. Zookeepers brought the baby mountain lion to Tucson from California weeks later, but May 20 was his first day in the public eye.

“The mountain lion is significant to the park. They’re very popular,” said Shawnee Riplog-Peterson, the museum’s curator of mammalogy and ornithology. “It was very disappointing for many to not see any mountain lions in the exhibit.”

She called it “good timing” when the California Department of Fish and Wildlife called about an abandoned mountain lion found in San Jose.

But zoo patrons hoping for a glimpse of the furry baby boy left disappointed on Sunday. The new cub —the first baby mountain lion to be introduced to the park in over 20 years — was too shy to make much of an appearance. 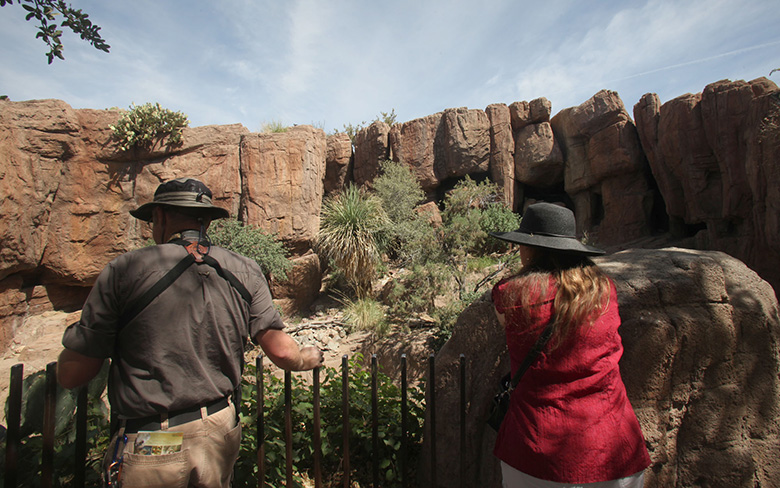 Two visitors hoping to catch a glimpse of the newly acquired cub. Some visitors waited up to two hours to see the cub, which will be named through an online contest. Elaine N. Cromie | NYT Institute

The cub had emerged from his safe spot just as the zoo opened at 7 a.m., but his outdoor venture only lasted a few minutes. Overwhelmed by the sight of about 30 people gathering around the desert-like enclosure, the cub ducked out of sight, said Debra Benson, a zookeeper who works closely with the new cub.

“It’s up to him when he comes out, whenever he is comfortable,” Benson said.

He wasn’t ready to be seen when Marcia Strange, 63, stopped by. She and her husband come to the zoo so often that they know all the attractions by heart.

“We wanted to see the new cub,” she said. “We thought getting here at 8 was early, but apparently we just missed him.”

Strange and her husband, who are annual pass holders, waited for 45 minutes before giving up. Disappointed but undeterred, the couple said they would return next week.

In the early days of the zoo, Benson said, a worker would walk around the grounds with a mountain lion on a leash. The zoo hopes to bring back that connection between the animals and visitors by holding an online naming contest for its newest addition. Over 400 entries were submitted on the first day, Riplog-Peterson said.

The orphaned mountain lion weighed only 15 pounds when he was rescued at 2 months old. Kept in California for a month and a half, he was nursed back to health until he was ready to leave for Arizona. While there, he was kept in a small holding cell and was not yet used to crowds of people, Benson said.

The cub has been at the zoo for the past six weeks, spending the first month in incubation. Now almost 6 months old and weighing a healthy 51 pounds, about the size of a Siberian husky, he is being trained to associate positive behavior with treats. When full grown, Benson said he’ll weigh about 110 pounds.

The retired lions are familiarizing themselves with their new home too. The aging lions could no longer climb the steep steps of their exhibit, so the siblings’ new quarters require less agility and include a resting platform.

Most zoos do not have retirement plans for their animals, but Benson said the Arizona-Sonora Desert Museum cares for its animals from birth to death. Most of the animals they take in are orphans, so, she said, they won’t abandon them again in retirement. 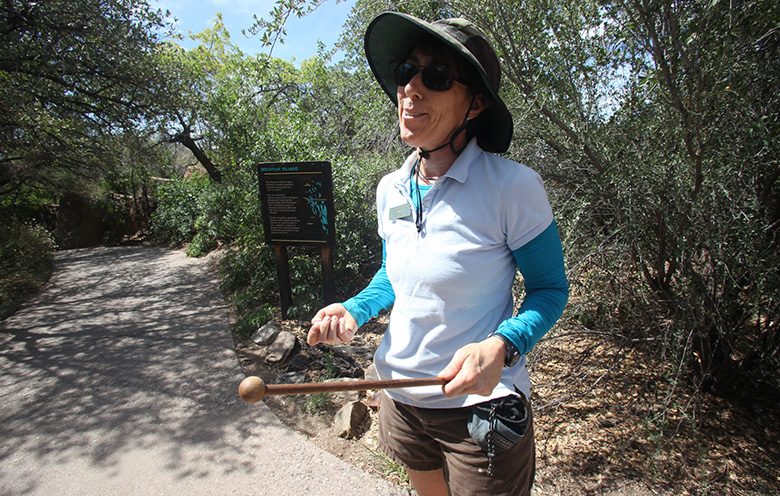 “Space is always hard to find. It’s hard to come by money to build retirement centers, so we modify a lot of our spaces,” said Benson, who has worked at the zoo for 12 years. “This is exactly what they need.”

Park visitors miss the sibling mountain lions but are relieved that a new critter has been brought to the zoo.

“The brother and sister were just beautiful, beautiful animals,” said James Scott, who frequents the zoo to photograph the animals. “Now we have a new cub, and I’m going to try to stay here as long as I can see him.”

Karen McCrorey, 52, said even her bad hip could not keep her from seeing the zoo’s newest ambassador.

As people started to wander around the zoo, waiting for the cub to reappear on Sunday, McCrorey was the first to spot him. “There he is!” she yelled.

From the exhibit’s highest alcove, the cub poked his head around a rock wall. He slowly made his way out, bringing his favorite toy with him, a red ball from California. But when the ball dropped to the exhibit’s lowest step, the cub returned to his safe spot. Only his paw remained visible.

And that was enough for the crowd.