The Puzzles Left Behind by Death 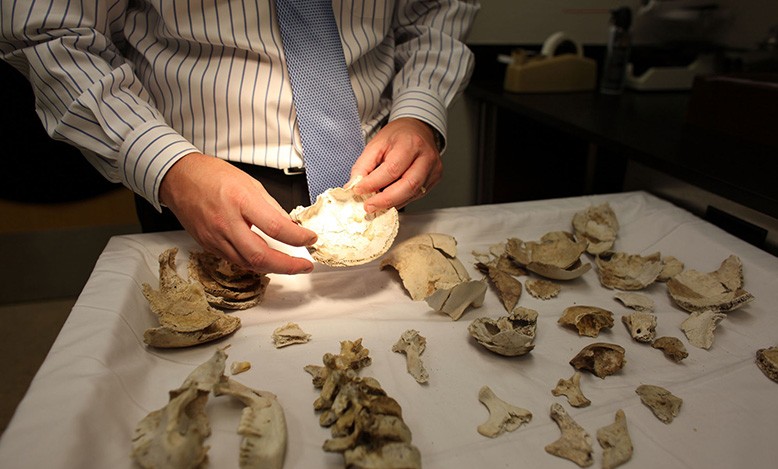 Dr. Gregory Hess, chief medical examiner of the Pima County Office of the Medical Examiner, studies some skeletal remains found in the Sonoran Desert, where many migrants die in the harsh conditions after crossing into the United States. Elaine N. Cromie | NYT Institute

A pair of camouflage pants.

They were part of the outfit the family of a 19-year-old migrant from Nogales, Mexico, recalled him wearing as he left to make his way across the border.

After he had been missing for some time, the family started looking for their son.

With the help of Robin Reineke, coordinator of Pima County’s Missing Migrant Project, the family had a possible lead.

A body found on Oct. 29, about 10 miles from the border near Lukeville, Ariz., was wearing similar pants.

But could it be him?

MARKERS REPRESENT BODIES FOUND. CLICK ON EACH TO SEE OBJECT.

The details of clothes worn and objects carried by migrants is how the 31-year-old Reineke, a cultural anthropology graduate student at the University of Arizona, said she hopes to solve the almost 800 cases of unidentified bodies.

Every item provides important clues to the identity of the dead, but they also tell the personal stories of those who embarked on the treacherous journey across the Sonoran Desert.

“It has gotten so dangerous that you have people telling family members, ‘if I don’t make it, this is what I am wearing,’” Reineke said.

The mother of the young migrant from Nogales recalled a small detail. Her son had fastened an extra button on the inside to tighten the waist.

When Reineke checked, the button was there.

The family is now working with the Consulate of Mexico in Tucson to confirm through DNA testing that it is indeed their missing relative.

The medical examiner’s office — which handles remains from three of the four counties along the Arizona-Mexico border — has recorded more than 2,000 cases of unidentified bodies and remains found in the desert since they started keeping records in 1990.

After security on the border was tightened in 2001, the numbers jumped from roughly a dozen a year to about 160, according to Dr. Bruce Anderson, a forensic anthropologist at the medical examiner’s office.

Most deaths occur in the summer, when the desert’s unforgiving temperatures can reach up to 110. Many of the bodies are badly decomposed from the elements, and those found on more remote paths may have been there for years.

The remains receive a full examination, including dental X-rays and DNA samples. But many fit the same profile — males, 20 to 55 years old — further complicating the identification process. 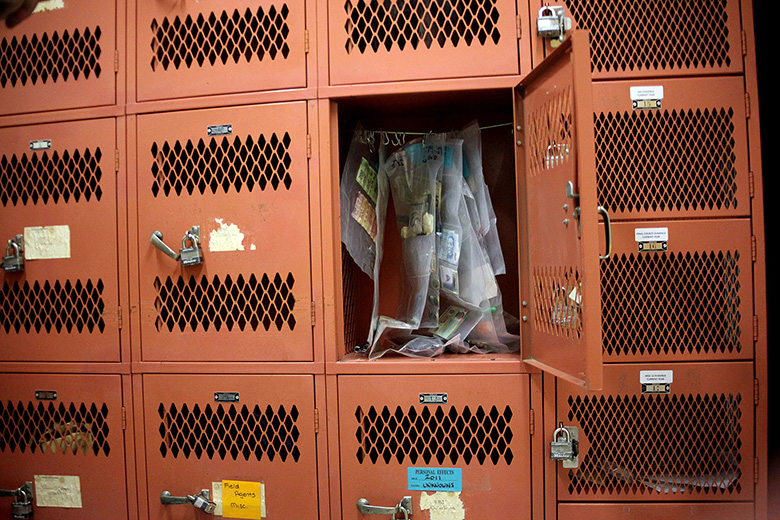 An open locker at the Pima County Medical Examiner’s Office in Tucson stores items collected from an unidentified border crosser. Migrants crossing the U.S.-Mexico border leave everyday items in the Sonoran Desert. Some belongings are left behind and some are found with migrants’ bodies, which are transported to the medical examiner’s office. The belongings can be clues to identify remains. Elaine N. Cromie | NYT Institute

The objects left behind are thoroughly inspected, catalogued and carefully packed in plastic. They are kept in small lockers in the medical examiner’s office, near the room where the overflow of bodies are stored in the summertime.

All remains, including the objects, are held for six to eight months and then cremated. The sheer volume of cases prevents the medical examiner from holding on any longer.

Each new item is carefully studied by Reineke and others from the medical examiner’s office as they look for any clue to track down the families.

“More and more it’s about the things in pockets,” Anderson said. A wallet full of Honduran currency, for example, can help narrow down the country of origin.

While items like identification cards and birth certifications are often recovered, they usually contain false information — begotten in the effort to cross the border and live in the United States undetected.

Other items — including a flint arrowhead, a yellow nail clipper or a wallet with a Chivas logo — may not provide many clues, but they help tell the stories of those who took on the trek.

Of the thousands of objects Reineke has handled, a few have stayed with her, including a small orange-colored paper flower. “It was found on the body of a 14-year-old boy we found in the summer of 2009,” she said.

A large portion of Reineke’s job is matching up the missing persons’ reports with the unidentified remains in the medical examiner’s office. She is now using the National Missing and Unidentified Persons System to upload her cases, both of those unknown and of the missing.

The Missing Migrant Project is the only non-police agency capable of entering reports for missing foreign nationals into NAMUS; it’s a rule she fought to change.

The goal is to eventually have all the information from the medical examiner’s office uploaded to the online public database, allowing families to search for loved ones more easily. Of those files already uploaded, the photos of the objects can be viewed online.

Inside two desk drawers in Reineke’s office are 1,400 files from families looking for loved ones, almost double the number of unidentified cases.

The objects, and bodies, keep pouring into the office. And some provide hints on why one would make the journey.

Among the many items sits a wallet-sized photograph of a schoolgirl with a playful smile that reveals missing teeth. On the back it reads, “warm wishes.”