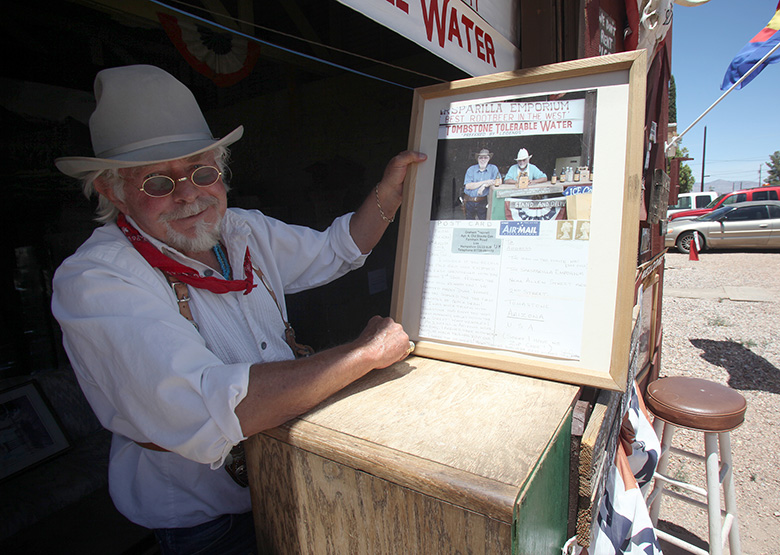 A man who calls himself Johnny One Dog at his sarsaparilla shop in Tombstone, Ariz., with a postcard sent from a customer who visited from Hampshire, England. Tourists from around the world come to Tombstone for the Old West experience. Elaine N. Cromie | NYT Institute

Tombstone, Where Shots Are Heard ’Round the World

A mountain man married an Apache princess of sorts in the Old West outpost of Tombstone last Saturday, while a Swedish couple in cowboy and cowgirl outfits peered through the lenses of their cameras.

Just another day in Tombstone, where the Old West meets a strange kind of street theater that’s part tourism and part history.

The full-dress wedding of Debbie Collins, a New Mexico woman who said she is of Apache ancestry, and a Hollywood stuntman-turned re-enactor gunslinger named Kip Farnsworth, raised barely an eye in a town where visitors come to gasp at re-enactments of historical scenarios, especially gunfights.

Over Memorial Day weekend, Tombstone celebrated “Wyatt Earp Days” in honor of the famous local lawman. Earp, along with his brothers and Doc Holliday, shot the outlaw cowboys Curly Bill Clanton and Tom and Frank McLaury at the infamous gunfight at O.K. Corral, which has been epitomized in many movies. 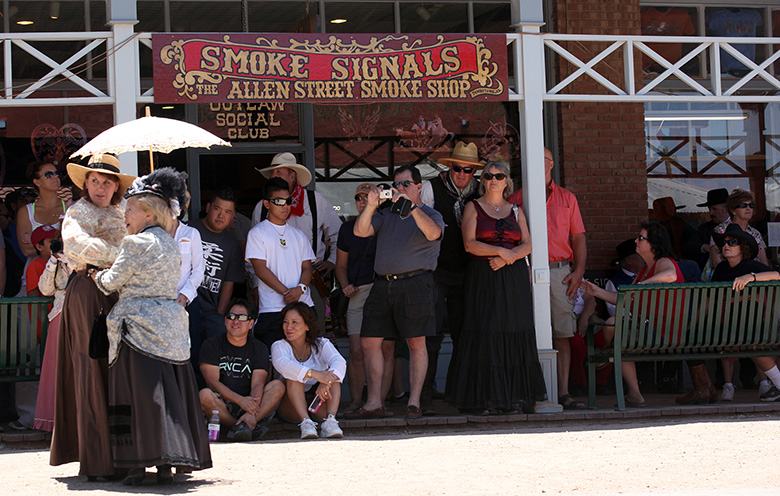 “Yes, yes, the Wild West! We are big fans of cowboys,” said Ursula Vogel, a tourist in town on a trip from Bergdietikon, Switzerland. “It’s very popular. Every year in Zurich, there’s a country festival over 30 days, with line-dancing and music every day until the night.”

In keeping with the historical flavor that so attracts some foreign tourists fascinated by the American cowboy era, Vogel and her husband, Urs, visited Tombstone wearing tasseled vests, wide-brimmed Stetsons and embroidered cowboy boots that they brought from home.

It’s been 40 years since the last John Wayne film and the heyday of the cowboy movie, and a century since Frederick Jackson Turner famously declared that the American frontier was closed. But global interest in the lore of the American cowboy who tamed that wild frontier still finds a stage in Tombstone, where history is interpreted in the sprawling theater of Allen Street, site of daily staged gunfights, bedazzled saloon ladies and scofflaws and, of course, the famed O.K. Corral.

“We think it’s a lost dream,” Vogel said. “We know life was very hard for the cowboys, the women and the children and others in the West. But still, it’s a little bit like a dream from yesterday. We in Europe never had this.”

On Allen Street, besides a few foreign tourists wearing costumes, you’ll also find the likes of a man who insists his name is just Johnny Bones, who is a busker, one of the world’s oldest professions: entertaining on the street for tips.

Johnny Bones stands on the side of the street wearing a colorful swath of patterns and prints, scarves tied around his wrists and knees, strings of coins dangling from his waist. He plays the rib bones, a rhythm instrument integral to 19th century minstrel music.

Bones said the setting lends itself to easy romanticism, perhaps partly explaining the appeal to some international tourists whose own history lacks the wide-open landscape of the cowboy Old West.

“Germans, too, really love the Old West. They romance it big time. So did us kids my age, but that seems to be fading with the youth,” he said. “It’s all about action and shock value now.” For many young Americans, he said, “the Old West is too laid back.”

In its 1880s heyday, Tombstone was home to gambling halls, brothels, saloons, the proper Schieffelin Opera House and the more rambunctious Bird Cage Theatre, and had a population of 14,000.

In the 1993 movie “Tombstone,” a narrator described the setting portentously: “1879. The Civil War is over and the resulting economic spurs great migration west. Farmers, ranchers, prospectors, killers and thieves seek their fortunes.”

From 1877 to 1890, Tombstone became a copper and silver boomtown, producing up to $85 million in silver bullion alone.

Now the population has dwindled to 1,380, and the economy depends on tourists’ reliving the drama of yesterday (a past that perhaps never was). While tourism has been declining, there are spurts of visitors on big weekends, like Wyatt Earp Days and the Fourth of July.

A National Historic Landmark District since July 4, 1961, Tombstone became a tourist town in the 1950s after Jack and Emma Main bought O.K. Corral and hired Sid Wilson, a cowboy performer-turned-showman who claimed to have performed with Wild West shows that once toured like circuses. 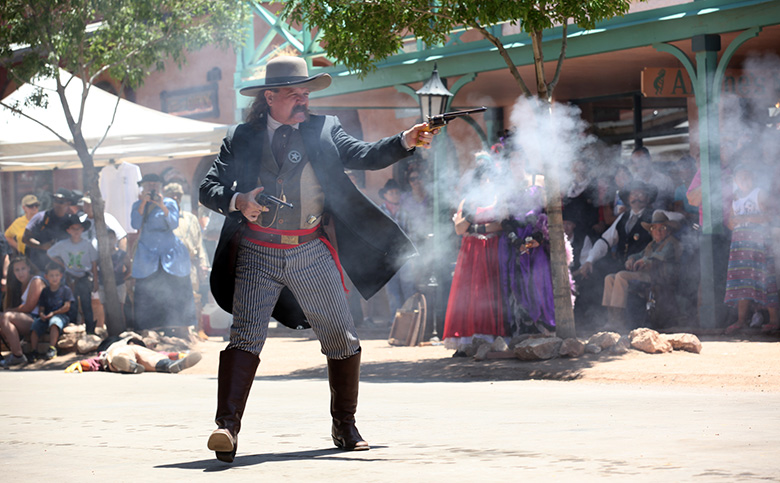 A cloud of smoke dissipates as an actor fires blanks during a re-enactment of Tombstone. Elaine N. Cromie | NYT Institute

“Sid recreated as he saw fit,” according to an oral history framed in a town museum. Wilson rebuilt the O.K. Corral “from a three to four feet high adobe wall to what you see today,” according to The Tombstone News, a local newspaper. He built a blacksmith shop, making trinkets for tourists, and hired a group of self-styled re-enactors and entertainers. The early group included Princess Apache Ann, Tombstone Sam and Nino, who claimed he was the grandson of the legendary Apache Chief Cochise, known for courageously resisting intrusions by settlers.

When Emma Main died in 1964, outstanding taxes forced the sale of the O.K. Corral to its current owners, the Harold Love Corp.

The town’s “too tough to die” slogan lives on, despite skeptical scrutiny from the National Historic Registry about the historical authenticity of some buildings and the dates attributed to them. Tombstone continues to walk the line between history and entertainment, though the line tends to bend in the direction of the latter.

“You know, we’re struggling,” Johnny Bones acknowledged from his post on the street. “On big weekends, we always do well. On weekends, it’s fair. On the weekdays, it’s a struggle.”

Visitors who buy a $10 ticket for the 30-minute dramatic re-enactment of the Gunfight at the O.K. Corral can visit an adjacent museum of artifacts from the historical era, documenting the mundane, tough lives of the teenage cattle drovers known as cowboys. The ticket also includes a short film on the town, and a souvenir copy of the Tombstone Epitaph, the famous paper of the era, which includes reprinted articles from the 1880s. (The journalism school at the University of Arizona publishes a separate monthly local edition of the Epitaph, while a university professor, Frederick Schoemehl, edits a national edition for history buffs).

For some, Tombstone is still a frontier of sorts, in that it affords a chance to start over again.

“Why did I come here? Desperation,” said Johnny One Gun, who sells micro-brewed sarsaparilla across from the city park. He declined to give his real name.

Johnny One Gun wore a tan cowboy hat and overalls over a white long-sleeved shirt, his gun in a holster on his chest. 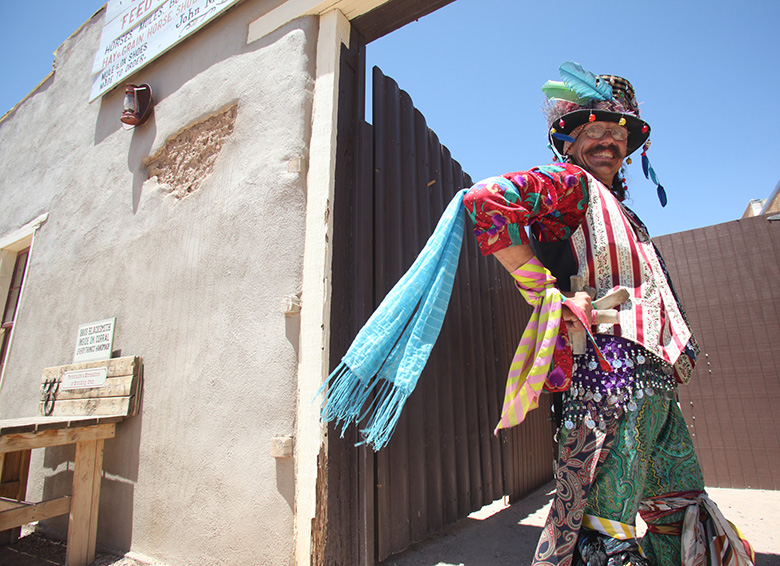 “Well, I was down in Phoenix, running an R.V. business,” he said. “And then the economy crashed, and I got cleaned out. I didn’t have anything to do, so I came here.”

He rested his elbows on the counter of his red stand, flanked by two wide doors plastered with homemade signs: “The Best Rootbeer in the West!”; “Wyatt Earp Drank Here.” Another shows Johnny One Gun’s face superimposed on Mount Rushmore.

“I’ll be here forever,” he predicted.

Michael Hall, of Gardena, Calif., said he enjoyed a tour about the gunfight at O.K. Corral.

“The guide told you a lot about the events that happened, how it all just happened from an argument. It’s insane,” he said. “I think one thing, growing up as kids and being taught in history classes about pilgrims and cowboys,” but a realistic re-enactment adds new dimensions to the history he learned.

Near the blacksmith stood Benjamin Joel Caron, who plays Billy Clanton in re-enactment of the gunfight at the corral. He said he dies six days a week: three shows a weekday, five on the weekend.

“I spent seven years in New York going to acting class and school and shows, and then I came back here,” said Caron, a native of Sierra Vista, Ariz. “The crowds love it; the locals love it and we love it. We do it for the love of theater.”

Johnny One Gun said the appeal of the West reaches across international boundaries and time itself, back to an era when life was untamed. “The West was a new land, a free land, an open sky, an equal opportunity. And what was following? Railroads. Progress.”

Down at the municipal park, meanwhile, the wedding proceeded. Little girls with long dark hair and wearing tasseled dresses walked in procession toward a white gazebo, tossing petals before the bride, she in turquoise and creamy buckskin.

The groom, Kip Farnsworth, is a former stuntman who said he had a close-up in the most recent Tombstone movie, in a scene in which he was dragged by a horse. Farnsworth, who works as a gunslinger in the daily spectacle of Tombstone, had a furry mountain-man hat on his head despite the heat.

Bible in hand, the officiant made an announcement to the crowd. “If there’s anyone here with just cause about why these two should not be married, then I suggest you close your mouth,” he said.

The best man, William Gaudioso, of Magdalena, N.M., confided: “The bride is my grandma; it’s my first time here.” He added, ” “This is where the groom is from, and he knows everybody.”

After the ceremony, the happy bride said she met her groom through the Internet. “Now we’re just going to hang out for the rest of the day,” she said. “He’s got a gunfight tomorrow morning.”

CORRECTION: This post has been updated to correct the name of a town in Switzerland where Ursula Vogel is from. It is Bergdietikon, not Bergdietikou.