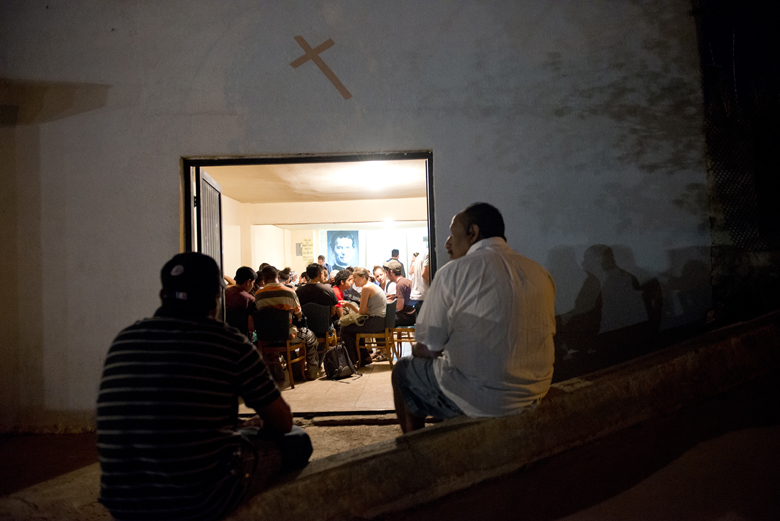 Two men sitting outside the chapel of the San Juan Bosco Migrant Shelter in Nogales, Mexico. The shelter has welcomed deported migrants for the past 31 years. Molly J. Smith | NTY Institute

Deported to Mexico, but Not Planning to Stay

Sitting inside the crowded Juan Bosco shelter for those newly deported from the U.S., Juan José fidgeted with a pair of keys and bounced his boots on the cold tile floor.

Juan José had just been deported to Nogales, Mexico, from a prison in Arizona, where he had been sent after being convicted of illegally re-entering the U.S. His is not an unusual situation. Last year 37,000 migrants were prosecuted for the same crime.

Looking around the room, he began to ask some of the 30 other people if they could recommend a reliable “coyote” to guide him back across the Sonoran Desert into the U.S.

“There are hundreds of them,” he said later, with a hint of caution. “It’s just that 80 percent are full of it.”

In the morning, he said, he would go across town to a different migrant shelter for breakfast and then try to cross into the United States — for the eighth time in two years.

If Juan José is caught, he could go to prison for up to two years for attempting to re-enter the country. He has already been deported four times.

It is a risk he and many others at the shelter Friday night said they were willing to take, despite a steep increase in criminal prosecutions of migrants illegally crossing into the U.S.

A report released at the end of May by Human Rights Watch said that prosecutions for illegal re-entry into the U.S. have shot up 300 percent over the past decade while illegal entries into the U.S. for the first time has gone up to 48,000 — an increase of 1,400 percent.

While the criminal penalties are steep, many migrants at the shelter said jail time would not deter them from attempting to cross again to reunite with their families or to find work in the U.S.

Juan José, 22, was brought to the U.S. when he was 7 months old and grew up in the suburbs around Phoenix. His application for residency was canceled in 2011 when his father, who was also his sponsor, was arrested and had his residency revoked.

Since then, Juan José, who asked that his full name not be used, said he has repeatedly tried to return illegally to the U.S., with mixed results.

“It’s about my family,” he said. “If it wasn’t for my little brother and sister and my mom being over there I would just try to re-establish my life over here.”

He said his family is struggling to make ends meet without the income that he used to bring in as a crew foreman at a cantaloupe farm in Maricopa County.

His last attempt to cross the border was in February, with a group of 10. The coyote forced them to hide under a trailer in the desert outside Naco, Ariz. He gave them a single 2-liter bottle of soda and told them to wait until he returned with a truck.

Two days later, the coyote was finally back, warning that the Border Patrol was nearby. If they wanted a ride out they each needed to pay $5,000 — twice the original price. Juan José and others said they wouldn’t pay, and they were left behind for the Border Patrol. The agents simply sent them back to Mexico without going through court, he said. 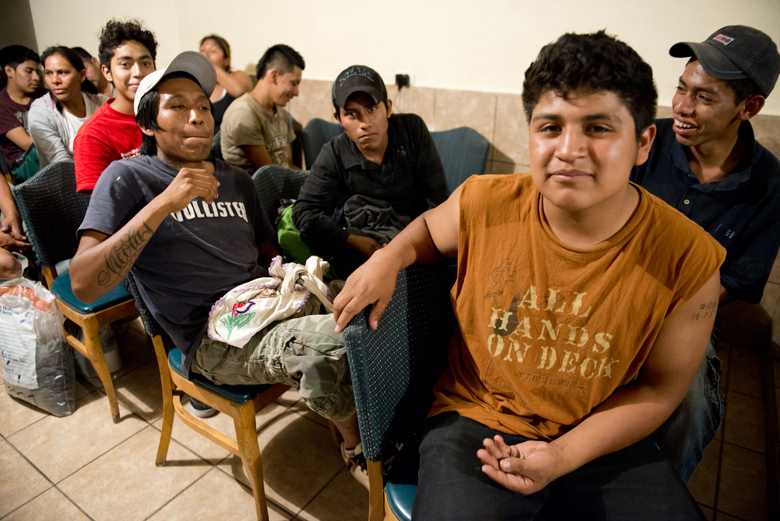 Migrants in the chapel at the San Juan Bosco Migrant Shelter in Nogales, Mexico. Many of those at the shelter were recently deported or are planning to try to cross the border. Molly J. Smith | NTY Institute

Frightened by the experience, Juan José said he then attempted to cross on foot through the port of entry in Nogales with a woman who claimed to have paid off a guard there. The scheme didn’t work, and Juan José served three months in the Florence Correctional Center in Arizona for illegal entry.

When the prison bus dropped him off in Nogales on Tuesday, he went in search for the volunteer van headed for the San Juan Bosco shelter.

The shelter provides dinner, a bed and basic aid for migrants. The number who seek aid each night can vary from a dozen to 100, staff members said.

The specter of jail time also won’t prevent Raul Ramires, 27, from trying to cross again — but the price of a coyote might.

Asked to estimate the cost, he paused and quickly conferred with others at the San Juan Bosco shelter. Around $4,000, he estimated.

Ramires said he had crossed into Mexico to visit his father, who had a diabetes-related illness. He feared his father might be dying and wanted to be there.

His father recovered and Ramires has since been deported twice after illegally crossing back into the United States.

Family drove Ramires back to Mexico for the first time in 15 years, and is the same reason he attempts to return to Colorado.

He said he considers the Mexican state of Guerrero his home, but in “Denver, my family is there.”

There are a handful of other migrant shelters in Nogales, but none operates on the scale of San Juan Bosco, according to Robert Phillips, the executive director of the Santa Cruz Community Foundation, a U.S. charity that assists programs in Mexico.

Many of those the shelter serves are driven by the need to support families, Gilda Loureiro said.

That’s the case even if that family isn’t in the United States.

Miguel Perez, 32, has illegally entered the U.S. twice, with the hope to find work, but he has been deported both times. His wife and children live in his home state of Puebla, where he earns no more than $70 a week. Perez says he can make more — $100 a day — roofing in Pennsylvania, where his brothers live, with only an elementary school education.

“I want to give my kids a future so they can continue their education” in Mexico, he said.

Sitting in a chair at the San Juan Bosco chapel on a Friday in May, Enrique Palacios, 19, took off his ball cap and wiped the sweat off his brow. He is from the cooler state of Tlaxcala. He said he didn’t expect Nogales to be so hot, even at night.

He said he imagined crossing the border into the U.S. as a simple daylong endeavor. Some of his older friends had done it before and they invited him along.

He crossed in a group of 11 near Nogales, and the coyotes made them move fast. Palacios said he could barely keep up and his group was caught by the Border Patrol three days earlier.

Palacios said he thought he would immediately be deported, but instead he had been sent to jail for two nights at the Florence Correctional Center.

He said he had never been in a prison before.

“To be enclosed inside, you don’t know if it is day or night because the lights are on all night,” he said. “It was horrible in there.”

He went through an Operation Streamline — a one-day proceeding that targets people who have crossed thÓe border illegally — that quickly took him back into Mexico.

Palacios said he has no family in the United States, and he is thankful for that.

“If my family was there I would go back, no matter what, but thank God they are all over here,” he said. “I have no desire to go back.”