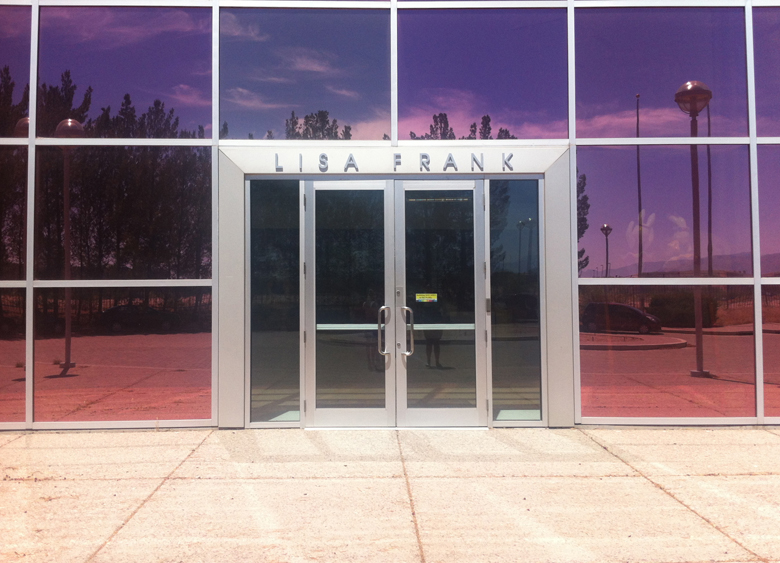 Hers was a name most every little girl knew — Lisa Frank, creator of a line of vibrantly colored school supplies covered in hearts, stars and rainbows. In the ’80s and ’90s, she was an artist who reigned supreme as her folders populated school desks nationwide.

Hers was an empire known for its hot pinks and purples, lime greens and yellows. It was a world of illustrated unicorns, puppies and surfing penguins.

Now, Frank’s namesake company is a fraction of what it was, and she has essentially disappeared. Her Tucson store is gone. Her spiral notebooks, stickers and pencils with butterfly erasers are a rarity on store shelves. Her factory, once bustling with hundreds of employees, has six staff members.

Frank’s company, a victim of protracted legal battles over ownership and bad manufacturing deals, faded from popular culture — not an uncommon fate of the animal known as the retail fad.

Her factory stands, a colorful concrete oasis in the middle of the Arizona desert. Engraved in the building’s light blue exterior are hearts and stars. Outside the door stands a silver unicorn missing its horn.

Ray Champaco, who has been the company’s mailman since 1996, remembers seeing delivery trucks and working employees when he dropped off the mail. “But not any more,” he said recently. Today, silence, not people, greet him in the lobby. 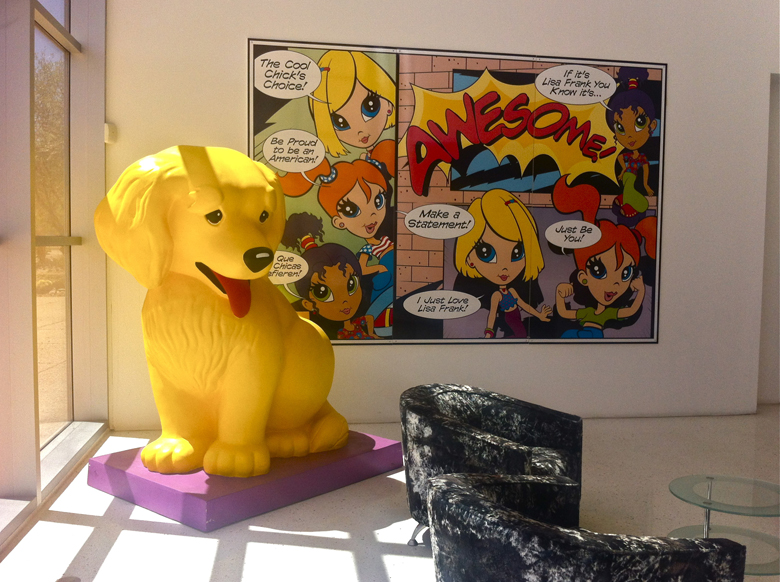 There is no secretary at the front desk, only a telephone and instructions. Visitors are to call the appropriate extension, so a human being can come outside. Tour-seekers are politely, but firmly, informed that the factory stopped giving tours about a year and a half ago.

Frank founded the small company-turned-phenomenon in 1979, according to its website. During the next 10 years, she moved the company from a small guesthouse to its current 320,000-square-foot factory.

The company’s accountant, Lee Gambrell, said employee numbers went from 350 to six over the course of a year.

Frank still runs the company, but would not comment on its business.

Urban Outfitters appears to be the exception; she granted the American clothing company an interview in September 2012. But even there, she asked that her face not be shown for privacy reasons.

Viewers hear from a silhouetted profile of Frank.

Urban Outfitters has a line of Lisa Frank T-shirts. There’s the one with unicorns and one with the tiny rainbow-colored cactuses. According to the clothing store’s website, it sells “rare vintage” Lisa Frank notepads, stickers and other items. That’s what she is now. Vintage.

Several former employees did not return phone calls or emails. But court documents tell a tale of a bitter divorce turned professional crisis.

A series of lawsuits began in 2005 when Frank sued her ex-husband, James A. Green, co-founder of Lisa Frank Inc., and the company itself.

According to court documents, she alleged that Green stole corporate property from the company’s offices to use “for personal reasons.”

Frank’s husband used a moving van to take computers and artwork from the company, court papers said, as well as items from a locked storage area. Green was ordered to return a portion of the items, but court documents said he kept a computer that contained company data for five extra days.

According to the suit, the company hired a forensic analyst to search the computers Green had taken. The analysis showed he had copied computer files, violating an order forbidding him to do so.

Several years later, Frank entrusted her company to a Delaware corporation, but according to a lawsuit field in Pima County Superior Court, the company reneged on promises to restore Lisa Frank Inc. to stores nationwide. So, she sued them in 2012.

The manufacturing and distribution company, CSS Industries Inc., told Frank that it could “put Lisa Frank back into most retailers in the US and Canada,” court documents said.

The company also promised to sell more than $15 million in Frank’s products within the first year of the agreement, resulting in $2.8 million for Frank. That didn’t happen, according to the suit, which is still pending.

Lisa Frank Inc.’s situation is nothing out of the ordinary, said Chris Christopher, director of consumer economics and demography at IHS Global Insight, a Colorado-based research firm.

“Most companies are not comeback companies,” he said. “If it’s fashionable, the way up and the way down can be quite dramatic.”

He added that some companies “survive in sort of niche places and they may reappear. Most don’t.”

Unlike the sales of consumer staples, such as toothpaste and toilet paper, Christopher said, a fad just dies down. “What’s happening more recently in the digital age or on the Internet, is things don’t have the longest shelf lives,” he said. “It’s part of the landscape.”

Although Frank’s products have not changed much, the company’s marketing strategies have. The company now breathes through its Facebook and Twitter pages, which are updated regularly. 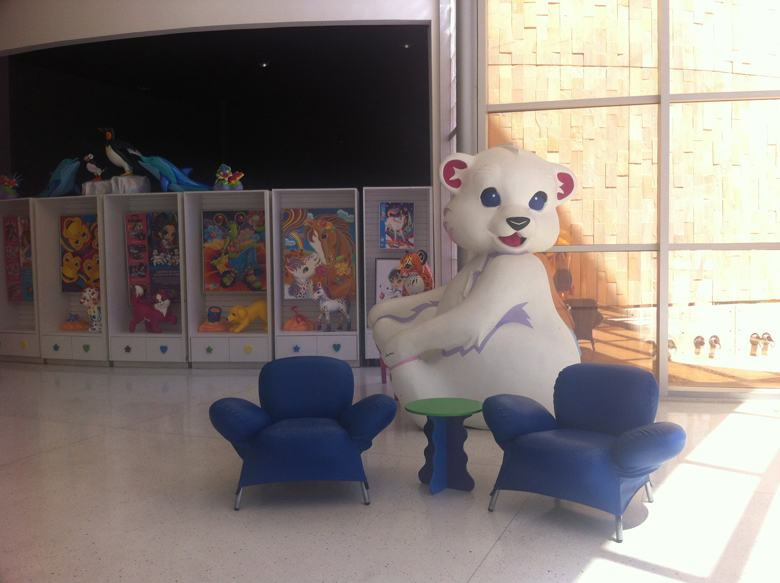 Lisa Frank no longer manufactures at her Tucson factory, but the decorative figurines remain in the building's lobby. Arielle Dollinger | NYT Institute

“Congratulations Class of 2013! #LisaFrank is your grad gift headquarters!” the company tweeted on May 29.

Many don’t know her, but they do know the colors and images she created.

Brianna Herring knows her as “the one that does all the unicorns.”

Herring, 20, a student of Pima Community College, did not own a Lisa Frank trapper keeper in elementary school but remembers her friends’ Lisa Frank school supplies.

“I think we kind of grow out of the little girl unicorn and all the bright colors kind of thing,” she said. “If she is still around, it’s for little girls now.”

Sharon Thorkelson has worked at Posner’s Art Store in Tucson, in close proximity to the University of Arizona, for 31 years — more than enough time to watch fads come and go.

And Thorkelson did more than just watch Frank from a distance. She sold art supplies to her 20 or so years ago. The art store was on Park Avenue back then, and Lisa Frank’s company was in its infancy.

“She used to come to the store or send people over,” she said. “She’d buy different papers and pens and all that kind of stuff for doing design.”

But now, the designs Frank made are often thought of nostalgically. Parents, not their children, associate super-bright hues and fantastical creatures with Frank and her legacy.

Maria Spain, a hairdresser, remembers Frank’s designs but doubts her 16-year-old daughter would know who she is.

CORRECTION: This post has been updated to correct the name of the company where Chris Christopher works. It is IHS Global Insight, not IHG Global Insight.