A group of greyhounds turn the corner of the racetrack at Tucson Greyhound Park. Since the 1980s, park attendance dropped from an average of 2,000 people to 30. Anibal Ortiz | NYT Institute

The Dogs Still Race, to the Echoes of the Past

Tim Walsh sat alone in the empty stands, a solitary spectator watching the sun set on Tucson Greyhound Park. Down below, a pack of dogs looped the lonely track, the first of a dozen races on a weeknight program.

Walsh would have been lucky to elbow his way out of the track’s parking lot in the 1970s, when thousands of people would jam into the stands, pressing against the rail fencing and shouting as the dogs they bet on dashed by.

Tuxedos and gowns were the norm, the smell of lobster would waft from the clubhouse and celebrity guests, like John Wayne, were the pulse of the party. 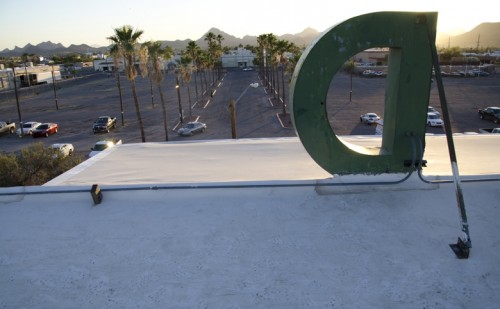 The empty parking lot at the Tucson Greyhound Park at sunset. The park is the last operational dog track in Arizona. Anibal Ortiz | NYT Institute

Tonight, the only voice echoing over the track is Walsh’s.

“Times are a-changin’,” said Walsh, who has gambled on dog racing for 30 years. “It makes me sad, but I’ve grown to accept that it’s just the way things are.”

Once a powerful industry, dog racing has become a shadow of its former self.

Since the 1980s, park attendance has shrunk from an average of 2,000 spectators to 30, said Alicia Heiserer, head of the track’s accounting department. That’s a 98.5 percent decrease.

Allegations of doping, protests by greyhound advocacy groups and competition from nearby casinos have pummeled the facility.

Nationwide, 27 tracks have shut down since 2001, and only 22 remain, Christine Dorchak, president of GREY2K USA, a greyhound rights group, said.

There used to be five operational dog tracks in the state. Tucson Greyhound Park is the last in Arizona. “There’s no interest in watching dogs run around in circles,” Dorchak said. “It’s a complete farce.”

Beyond the deserted clubhouse and up a flight of stairs is a rooftop booth. Inside is John C. Scott, the park’s announcer. 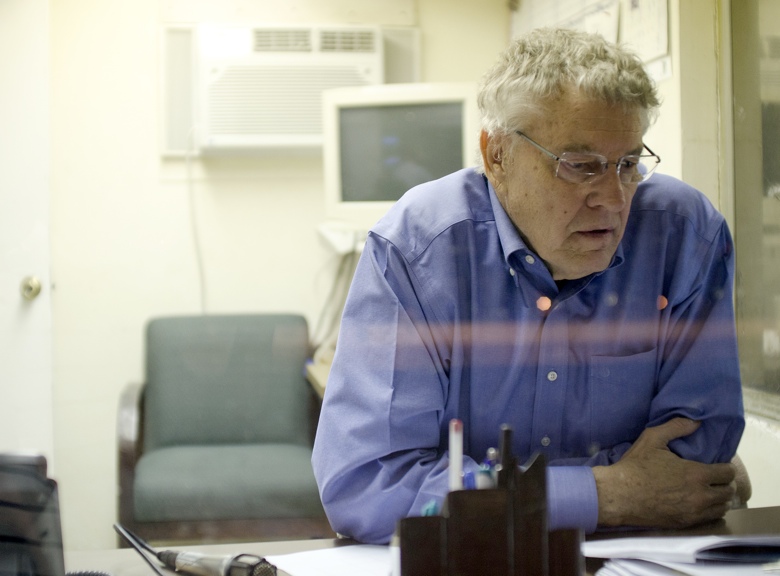 In his booth, John C. Scott, a track announcer, checks his sheet after announcing the dogs for a race at the Tucson Greyhound Park. Anibal Ortiz | NYT Institute

In the 1970s Scott worked in a shed with neither air conditioning nor a decent view of the track.

Scott would stick his head out of a window to call the race, which became even more of an encumbrance when it rained.

The 70-year-old is witty, fast-talking and zings off one-liners that keep the booth rocking with laughter. Scott affixes one eye on the track, and sporadically swivels his chair around to the microphone in mid-sentence to make an announcement before turning back to finish a joke.

Greyhounds are strategic, he said. Some weave patiently through the pack, while others rely on sheer speed to zip past the finish line. It’s a sport that demands intellectual sophistication on the part of the gambler, he added.

“It’s not like a casino where you just pull a handle,” Scott said. “That doesn’t take any thought. It’s not even scientific for God’s sake.” 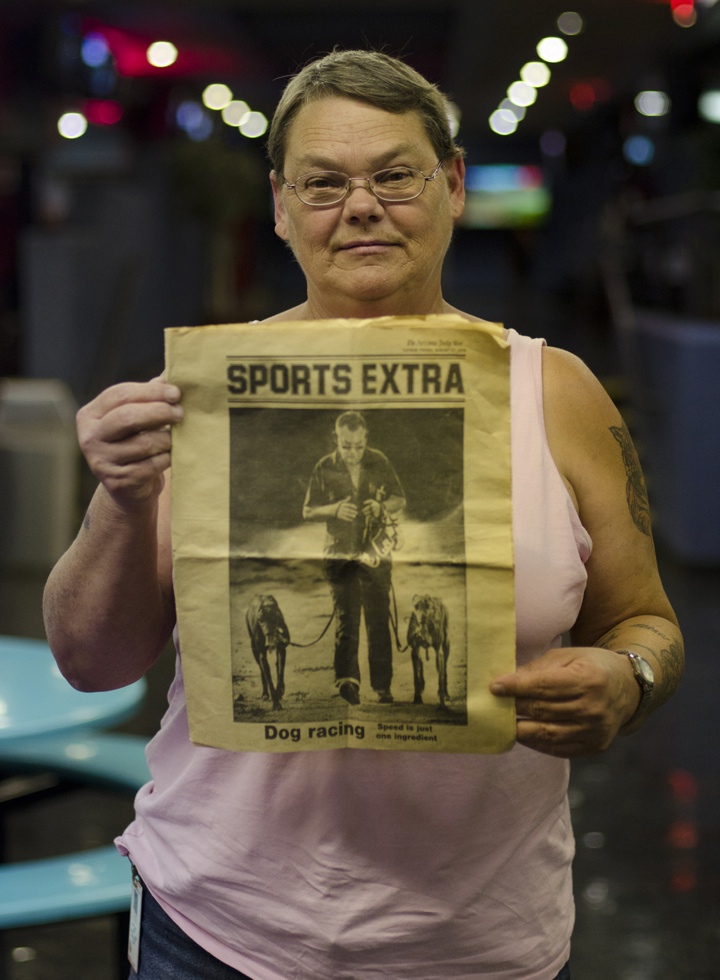 Kennel owner Mary Gray holds a copy of the Arizona Daily Star's August 11, 1978, Sports Extra section that featured her father. Like him, she is a kennel owner. Anibal Ortiz | NYT Institute

She was in the park’s dining area on a Friday night lamenting the barren atmosphere.

“You could shoot a cannon through here and not hit anybody,” Gray said.

She sported a pink tank top, blue shorts and thinly rimmed glasses. Her body is inked with tattoos, including one of a greyhound.

Gray watched her first race at the park when she was 5 years old, and has been a kennel owner for nearly 20 years.

Her father was a nationally known kennel owner whose devotion to the sport was symbolized by the small notebook tucked into his hospital gown pocket as he lay on his deathbed.

He updated the book, his “Bible,” with details about greyhounds up until a few hours before he died.

Gray smiled as she reminisced about the park’s heyday, laughing and pointing in the air as though apparitions of the people she mentioned appeared before her. But like a tarnished photograph, her smile slowly withered as she began to speak about the industry’s decline, and possible extinction.

“The animal activists started kicking up about how we’re so cruel to these dogs, and I just want to slap them,” she said. “They’ve done so much damage because of their ignorance. They don’t understand that this breed lives for those 30 seconds out on that race track.”

The dogs line up with their handlers before every race. There are about 11 races per event. #nytsji twitter.com/Taleb52/status… — Amer Taleb (@Taleb52) May 23, 2013

Dorchak, of the greyhound rights group, rejected Gray’s assessment, saying nearly 1,000 dogs were injured in Arizona from 2007 to 2009. This included everything from broken backs to paralysis of the rear legs. According to a 2011 GREY2K USA report, 67 dogs were euthanized as a result of their injuries.

Gray’s dogs are locked in crates for 20 hours daily. She said that greyhounds are naturally comfortable in an enclosed area, while critics argue that the practice is barbaric. All 74 of her dogs have had at least “minor dings,” and three to five sustain career-ending injuries annually. She ceded that dogs can face serious harm, but said animal advocacy groups hype the risks out of proportion.

In addition, records from the Arizona Department of Racing highlight recent instances of drug-related problems among workers, including a track official who tested positive for a cocaine metabolite and a trainer who refused a drug test. Both were suspended.

Earlier this year, Pima County ordered the park to cease injecting female dogs with steroids intended to keep them from going into heat so that they could still race. The ban forced the park to reduce live racing from six days a week to four—a hit that has cost the track tens of thousands of dollars per week. 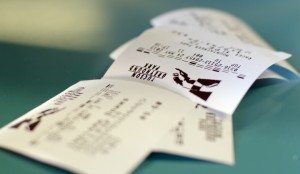 Betting stubs left on a table at Tucson Greyhound Park. The racetrack has faced a decline in attendance and popularity. Anibal Ortiz | NYT Institute

But with people placing bets via simulcast across the country, the track still averages $350,000 in weekly wagers, Heiserer, from the track’s accounting department,  said.

Ivan Camarena, a chart writer, said he has never seen an instance of animal abuse.

Veterinarians, security guards and cameras are stationed throughout the track to monitor how animals are treated, Camarena said. The park also has an adoption program to find homes for retired greyhounds.

“The overwhelming majority of these animal rights people who hate dog racing and think it’s a deadly sport have never been here and don’t know what the hell they’re talking about,” Scott said. “These dogs are bred to run, born to run and that’s why they exist. They’re not pets until they stop running.” 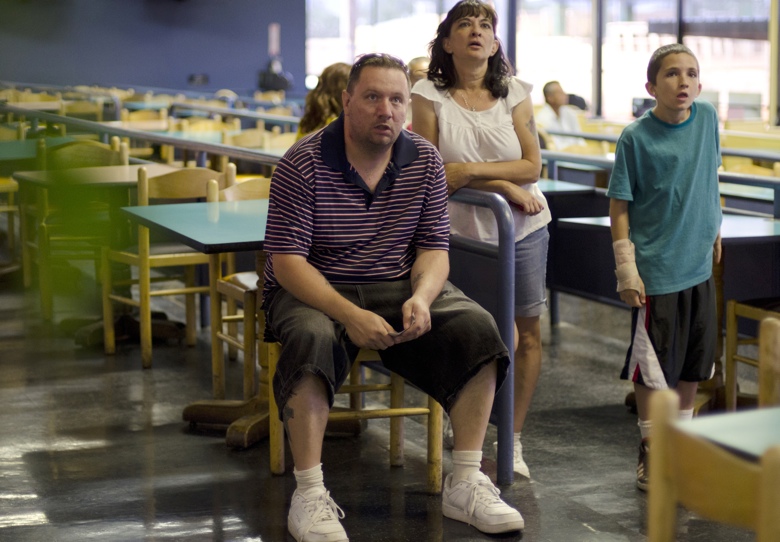 Brian Hayes, 35, left, clutches his ticket, the last bet of the night, as Lisa Hayes, 47, and Brian's stepson, Anthony Woznick, 12, watch the race on the screen. Anibal Ortiz | NYT Institute

Brian Hayes, who attended a race with his fiancée and stepson, said he was frustrated with how critics portray the sport, especially if they have never been to a dog track.

“Are we bad people for betting?” Hayes asked. “We’re not villains. We’re enjoying a sport that’s been around for hundreds of years.”

Back in the dining area, Gray spoke about the pain of being pinned under the emotional rubble of her culture collapsing upon her. The traditions of her father, she said, may not be around much longer.

Dorchak said she recognizes that it is difficult to let go of old customs, but recommended that people base their view of dog racing on a single question.

“We should ask ourselves, what’s the best thing for these dogs that have suffered for so long?” Dorchak said. “Greyhounds love to run, but they don’t need to race.”

Scott, the announcer, admitted that the industry is dwindling, but said that the track’s owners are committed to seeking remedies for their monetary ailments. Gambling machines would be a shot in the arm for the park, but attempts to get the legislature’s approval have been unsuccessful.

“People who’ve lived here long enough have either come to this track or they know somebody who did,” Scott said. “No matter what happens, it’ll always be part of Tucson’s history.”

Rooftop view of a race at Tucson Greyhound Park.