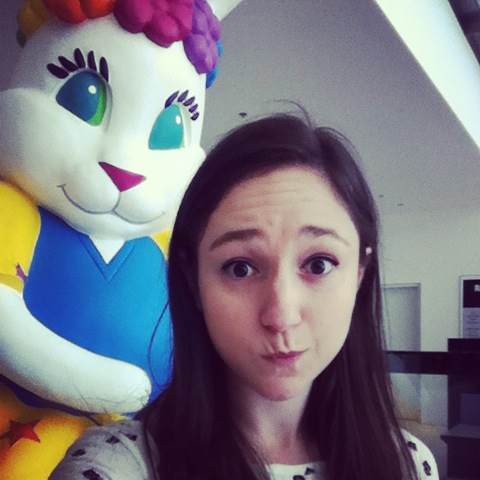 Engraved in the building’s light blue exterior are hearts and stars and music notes. Several feet from the door stands a silver unicorn. The unicorn’s horn is missing.

The day before, I had ventured into the lobby.

Within the lobby’s white walls are a giant polar bear and a golden retriever. A giant painter panda and ballerina bunny. There is no sound.

But today, I sat outside.

The mailman drove up. I got out of the car and waved him to a stop.

He told me he’d been delivering mail to the factory since 1996. There used to be people. Not anymore.

“We hardly see anybody out front either,” he said. “You leave the mail and you look over and there’s a glass petition and can’t get through there without any, you know, credentials.”

I didn’t have the credentials.

The day before, Lisa Frank’s art assistant came out to tell me that I would not be getting an interview. She gave me some postcards as some sort of consolation, as if they would make it OK that I couldn’t speak to the owner of the company.

It didn’t. I can’t quote postcards.

I tried everything I could think of. I got in touch with the lawyer who handled both her divorce case and a separate suit against her husband and the company itself. The lawyer told me he’d kept in touch with her and would speak to her about speaking to me. He forwarded the email I sent to him. I followed up. Twice. Nothing.

I even tried to find her address, wondering if I should employ the old “shoe leather reporting” technique and knock on her door. I found a seemingly logical address, that was attached to both her name and her ex-husband’s. I drove to the address only to find a “For Sale” sign at the beginning of a driveway that led to nothing but desert and cactuses. There was no house there.

I scoured Google Maps, examining satellite views of every possible address I could find, looking for a house like the one she’s described to other reporters. It’s supposed to be purple, hot pink, lime green, yellow. It’s supposed to look like her.

I called former employees and one called me back. She considered answering my questions, and then said that she’d rather not delve so far into the past as her time with Lisa Frank Inc.

But in this particular case, I think my failure to get to the subject of my story says more than a quote from her could have possibly said. Though her line of  T-shirts at Urban Outfitters would signal an attempt at some sort of comeback, as far as I’m concerned, Lisa Frank has disappeared.