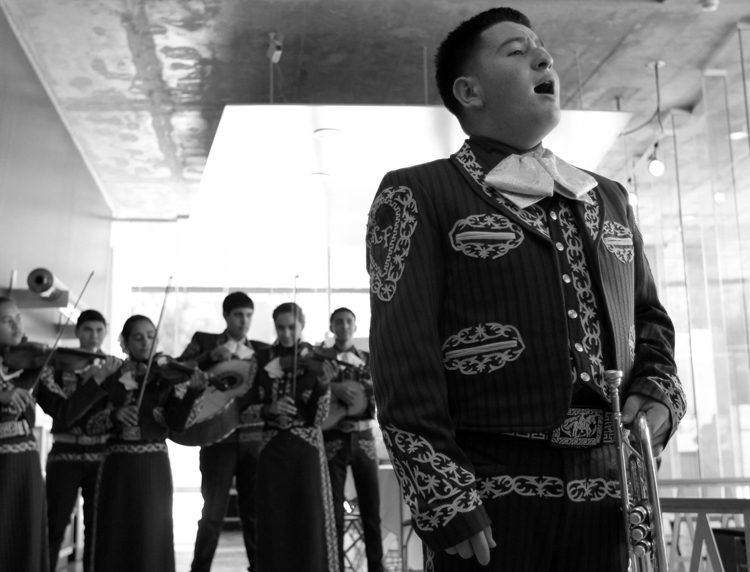 Here in Tucson, which aficionados call the mariachi capital of the U.S., children pick up their parents’ guitars and trumpets as early as 4 years old. The folk songs about love, heartache and Mexican culture span generations and borders.

“It’s our cultural roots,” said David Membrila, mariachi instructor at the Viva Performing Arts Center in Southside Tucson. “It’s our connection to Mexico. Especially in the Southwest, and especially in Tucson.”

Membrila said that mariachi brings alive the color of the country and embodies heritage. “It’s something we relate to as the heart of Mexico,” he added.

Mexican folk music’s roots can be traced to pre-Columbian times, but the Mexican state of Jalisco is commonly known as the birthplace of mariachi. After the Mexican Revolution, many mariachis lost jobs on haciendas and began traveling, learning new styles and playing for hire.

“Mariachi is a vagabond music,” said Membrila. “It was a poor man’s music.”

There are two trumpets, four to 10 violins, a vihuela — a small, round-backed guitar — and the guitarrón, which is the bass guitar. If you can find a harp player, says Membrila, that’s icing on the cake.

Membrila said that mariachi is a smart way to keep music in schools, especially for districts facing budget concerns. While schools are scaling back on music and arts, Membrila said, these “programs are flourishing.”

In Tucson, where more than a dozen areas schools offer mariachi programs, young players begin as early the second grade.

The most famous youth group in Tucson is Los Changuitos Feos, or The Ugly Little Monkeys, which offers college scholarships to encourage middle and high school students to stay in school and graduate.

A Tucson priest, Father Charles Rourke, founded the Changuitos in 1964. They’ve played at Carnegie Hall. They’ve played for the president. They will play for your mother.

The nonprofit group, which awards $16,000 to $18,000 a year in scholarships, generates money through fundraisers and grants. And, of course, they are hired to play at parties and celebrations.

One of their busiest times is Mother’s Day, when people ask the young mariachis to serenade moms, says Alex Garcia, a former Changuito alumni and current board president.

Garcia said the group plays three to four gigs a week, on average. They practice twice a week for two hours, “because,” Garcia said, “they have to be good.”

“When you’re charging people money, you can’t come out sounding like a middle school orchestra,” he said.

Garcia’s son, Isaiah, has played in the group for three years. He plans to study criminal justice and follow his brother, a former Changuito, into law enforcement.

Isaiah, 15, said playing with the Changuitos has helped him gain confidence. “You can’t be shy when you’re playing on stage,” his dad added.

Students must maintain a C average in school to be eligible for the Changuitos. But, Garcia said, “that’s never been a concern.” Students almost always perform well academically, he said. Former Changuitos have gone to become attorneys, doctors and teachers.

“If you want to keep a kid out of trouble,” said Garcia, “keep an instrument in his hand.”

CORRECTION: This post has beern updated to correct the name of the current president of Los Changuitos Feos. He is Alex Garcia, not Alexis.