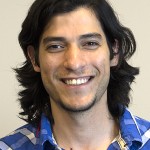 On his personal website, Erik Reyna describes himself in two ways. One description might draw the interest of possible employers; the other might attract the F.B.I.

He bills himself as a visual journalist and a hacker. The former draws on his experience as a photojournalist, for publications like the San Antonio Business Journal in Texas.

Reyna explained that he has experience with coding and programming, and that to him, being a hacker is more about creation than intrusion.

“Coding is about innovation,” Reyna said. “It’s about figuring out a way to build something and make it more engaging.”

Reyna, 25, entered college intending to become an engineering major, but soon realized that photojournalism held more promise and interest. After his cousin, an accomplished journalist, produced a five-part series on his family, Reyna became interested in pursuing journalism as a career path.

He went on to receive a bachelor’s degree in photojournalism from the University of Texas in 2010. Following a multimedia internship with The Victoria Advocate in Texas, he began freelancing with his knowledge of CSS coding. This would lead him to enroll in the University of California, Berkeley, to pursue a master’s degree in new media.

With his background in visual journalism, Reyna believes he has a unique perspective.

“I think I’m in a good spot because I came from a visual background, and when I code, I can key in on where photos fit best and layout a story,” he said. “I can put together something that goes beyond a template,” or a static layout.

Reyna applied to The New York Times Student Journalism Institute with the hopes of “learning by osmosis.”

“I’m a very do-it-yourself person,” he said. “Being here, we have brilliant people leading the group. I wanted to see how they work.”

Reyna hopes to go to The New York Times to work in programming and development to create new forms of storytelling.

“I want to be one of those people that figures out how people really engage with content, and to make the transition from print to online more engaging,” Reyna said.