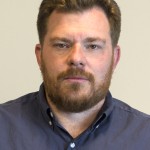 He can be found traversing the border as a stringer for Reuters, shooting photos and videos about research at the University of Arizona, or playing with his 2-year-old son, Connor.

Ingram, a master’s candidate at the University of Arizona’s School of Journalism, spends much of his time focusing on science and environmental issues in the Southwest, the place he has called home since his birth in Tucson 36 years ago.

“It’s a very interesting place, it’s a very complex place,” he said. “There is lots going on, and what I really like to do is cover it day to day.”

Ingram’s father, an electrical engineer in the defense industry, had three personal computers at home, which Ingram said sparked his curiosity and interest in science.

“I can always gravitate to that stuff very easily,” he said. “I’m very confident saying ‘I don’t know, teach me.’”

Ingram did some writing and journalism in college, including a stint as a copy editor for The Arizona Daily Wildcat, before starting a career in technical writing in 2000. In that job, Ingram would have to meticulously question software engineers to condense their work into simple manuals consumers could easily understand.

Ingram said he eventually tired of technical and bounced around a few jobs before deciding to come back to the University of Arizona in 2009 to pursue his master’s degree. Now he investigates the intersection of science, the environment and politics on life in the Southwest for numerous publications, including The Sonoran Chronicle, a news website he started in 2011 with another graduate student, Curtis Prendergast.

Ingram lives in Tucson with his wife, Heather, who works at the University of Arizona’s BIO5 Institute, and Connor. A self-described desert rat, Ingram said he hopes to find work covering life in the Southwest after he finishes his master’s degree.

“I like the idea of covering something as a beat consistently,” he said, “because what it means over time is I understand the issues, and I have also gotten to see how the issues have changed.”