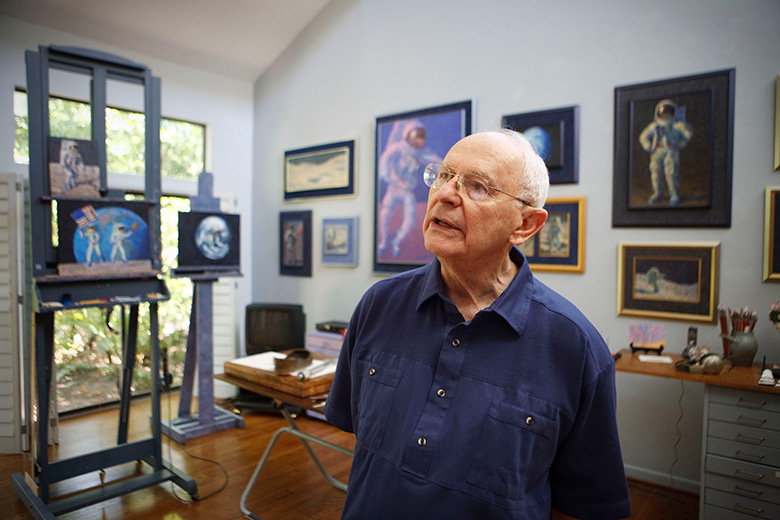 Former NASA astronaut Alan Bean, pictured in 2009 in his home and studio in Houston, is now an artist who paints scenes from the moon. Michael Stravato for The New York Times

The Moon in Technicolor, From Someone Who Knows

Few people on Earth have ever seen the moon quite the way moonwalkers have. But that is beginning to change, thanks to an astronaut who decided to become an artist.

“A lot of people think the moon is just black and white, but the surface actually has a cast of orange,” said Alan Bean, an Apollo 12 astronaut who returned to Earth and felt compelled to paint the colors that he and only a few others have seen up close.

In 1981, 12 years after he walked on the moon, Bean traded in his wrenches and flight control dials for a paintbrush. His new mission was to correct a mistaken view: The moon, he said, is not the color you think.

In fact, the surface has a lot of subtle color, Bean said.

The misconception began in a time when the entire world was looking.

From their TVs, citizens of Earth stared rapt as the Apollo 12 rocket hurtled through the sky.

The year was 1969, and viewers saw Bean and his fellow astronaut, Pete Conrad, walk on the moon — repeating the historic walk made four months earlier by the astronauts Neil Armstrong and Buzz Aldrin. But the world was no less enthralled.

Bean’s work is scheduled to be on display through the Memorial Day weekend at this year’s Spacefest V, a convention in Tucson, Ariz., featuring astronauts, artists and scientists.

The  convention has been held yearly in Tucson since 2011 at the Starr Pass Resort & Spa.

Bean said he aspired to be history’s greatest space artist and wanted to recreate what he saw on the moon in ways that cameras cannot.

Bruce McCandless II, an astronaut, also related to the unique perspective that space afforded him. McCandless performed humanity’s first untethered spacewalk in 1984. A photograph of him floating miles above the striking blue of Earth while strapped to a jet pack for safety is one of the iconic images of space travel.

McCandless was also at the convention in Tucson, and said that human imagination often struggles to see space the way he and other astronauts saw it.

“If you think about the constellations, they are the reasonably brighter stars in the sky,” he said. In space, there is no atmosphere to block out the dimmer stars. “You turn the background way up.”

In a sense, the universe comes out to say hello.

Bean saw the universe from orbit, too. In 1973 he was aboard Skylab for a 59-day orbit, which set a record at the time.

The majority of his more than 150 paintings are of moonwalks. The difference between what he saw on the surface and what the cameras picked up is mostly a matter of color.

“You don’t know the complexity,” he said.

Although the fans — some of whom came as far as Switzerland — came to see the astronauts, NASA experts and physicists, the hidden star of the reception may have been Bean’s paintings.

At first look, his paintings do not seem that different from any other lunar mission artwork. In “Cernan, Gnomon, and Crater,” for instance, a suited astronaut faces the canvas head on, his arms outstretched reaching for a camera’s tripod.

The background, however, was anything but gray. Behind him lay purple, green and orange stripes of moon.

Some of his paintings use color more subtly. In “New Glory for Old Glory,” Bean depicts Gene Cernan, the last astronaut who walked the moon, saluting in his spacesuit while holding the American flag. The flag is the star of the show in this piece, as blue and red pop from the frame. This painting of the moon’s surface has a more restrained use of orange.

Bean works with a man named Ernesto Avila, who used his iPhone to show one of Bean’s works in progress: a self-portrait.

“I wanted him to draw himself,” Avila said. But the self-portrait isn’t of the man’s face or profile, or anything that would clearly identify Bean.

Bean instead painted a NASA spacesuit and the gold tint of a helmet’s screen reflecting astronauts not depicted in the painting. The earth hangs large, half visible from the top of the frame.

Avila said he believed it was how Bean sees himself. “Alan’s most famous for being the fourth man on the moon and for ruining a camera on the moon — he pointed it at the sun.”

Avila wanted him to paint the camera for the portrait but said he “didn’t have the heart to tell him.”

Bean said he sees his work through the lens of history. Though the space race is long past and humanity’s fervor for space travel has cooled, Bean sees a future when humans will routinely travel — and paint — among the stars.

In his written description of “A Bright Christmas Tree Ornament,” a painting of Earth as seen from the moon, Bean illustrated his view of the future.

“As the centuries unfold, long after I’m gone, other artists will venture far enough into space to see the Earth as I have seen it, and they too will be inspired to paint it,” he wrote. “As the first artist in all history to leave our planet and paint images that no other artist has ever seen, what I have created will probably be compared to the works of those artists that follow. I want mine to be the most beautiful.”