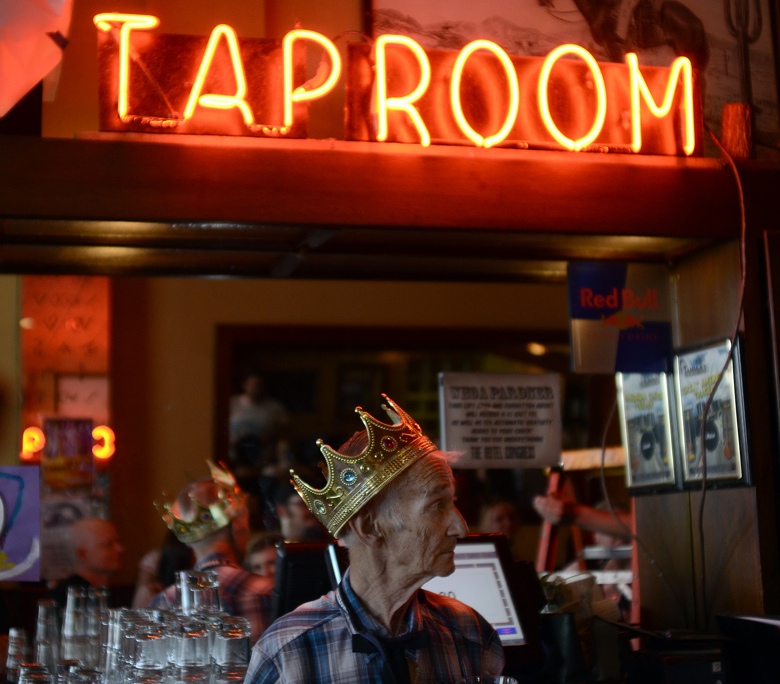 Tom "Tiger" Ziegler, 80, stands in front of a crowd celebrating his birthday at the bar inside The Hotel Congress in Tucson, Ariz. He began bartending at the Tap Room when he was 26 years old. Anibal Ortiz | NYT Institute

Where Everybody Knows His Name: It’s on the Bar

Few people know Tiger’s actual name, but his presence is unforgettable. Since 1959, he’s served thousands as bartender of the Tap Room at the Hotel Congress in Tucson, becoming as much a part of the tapestry as the broken operator booths, wooden phone booths and Wurlitzer Stereo.

But Thomas “Tiger” Ziegler has no plans to retire, even as he turns 80 — an occasion that calls for celebration, as Tiger looks back on  54 years of working the 11 a.m. to 6 p.m. shift.

Tiger pointed to an advertisement for the birthday party the hotel was throwing him. 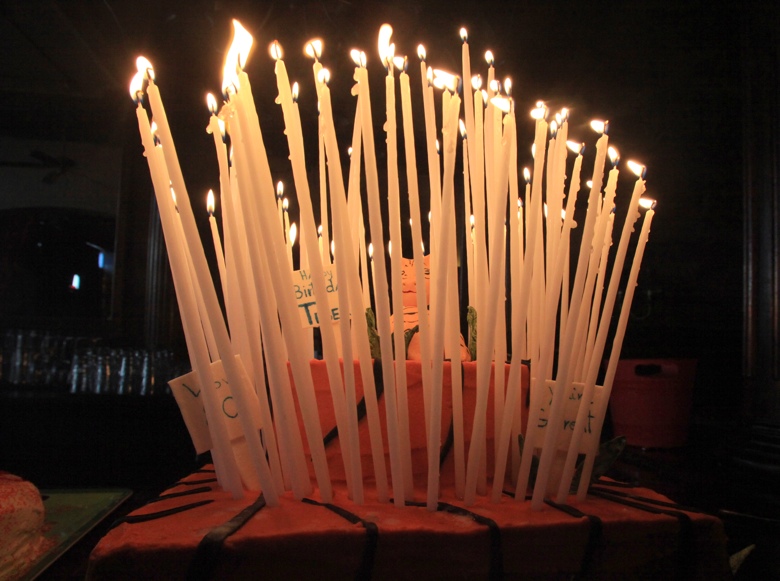 “This junk says I’m turning 80, but I’m only 39,” he said. “People must think I’m just an ornery little rascal, but I just tell ’em, how about you go suck a dill pickle.”

Tiger got the name on a rainy Saturday night, when the passenger train still ran in front of the hotel and the Tap Room was the only bar nearby.

A train had just come in, and a woman walked into the full bar.

As Tiger was mixing drinks, he heard a scream and turned to see a “big, beefy, 300-pound, 6-foot” man with his hands on the woman’s chest.

Then he held his breath for the inevitable punch.

Instead, the man walked out of the door.

The owner of the bar, who was watching from nearby, told him, “Go get ’em, tiger.” And the name stuck. 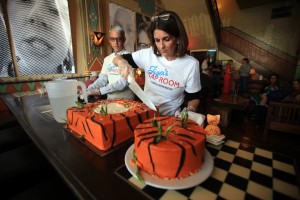 Along with the name, Tiger’s attitude remains.

“My ladies are treated right here,” he said, peering over his black-rimmed glasses. “No questions. My ladies will not be bothered.”

A man at the bar added, “Everybody here’s got his back. You don’t mess with Tiger.”

The octogenarian, with wispy silver hair that he carefully parts to the side, hums while making cocktails and scrubbing the wine glasses. Sometimes, he pops a quarter in the jukebox and plays “These Boots Are Made for Walkin’.”

He’s partial to bolo ties and wool Oxford sweaters, even in 110-degree Southwest heat. If you get close enough, you can smell a mixture of baby powder and coffee.

He’s sure he’s met some famous people but doesn’t remember any of them. To him, anyone who comes through the Tap Room’s doors is famous.

Tiger grew up in Dubuque, Iowa, alongside the Mississippi River. When he first came to Tucson, he worked for a trucking company. He was badly hurt when a Volkswagen ran a red light and plowed into the side of his truck. “We thought were going to lose him,” his brother, Arnie Ziegler, 82, said.

After Tiger left the hospital, he decided to leave the job and find something else, Ziegler said.

When he started working at the Tap Room in 1959, Castro had taken over Cuba and the United States had just added Hawaii and Alaska to the union. Beer was 15 cents a glass and mixed drinks were 25 cents at Hotel Congress.

Although almost more than 50 years have passed, the bar has not been touched by time, said Tiger. The bar has the same checkered floors, leather seats and horse-patterned curtains. 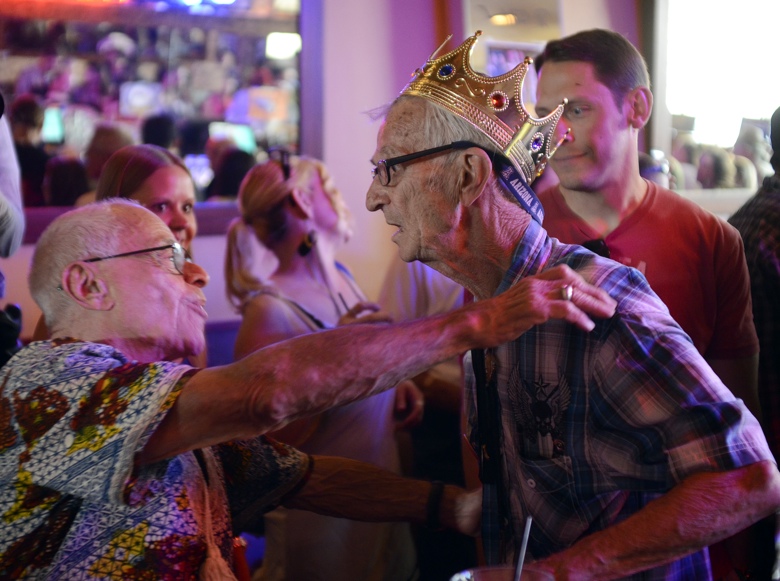 Above the red neon “Tap Room” sign is a clock that runs 20 minutes fast to dupe customers and allow bartenders to get out on time.

Hal Bardach, 77, who worked at the Tap Room, with Tiger in years past, said Tiger makes the best Bloody Marys but rarely drinks.

“He’s very wordly. He knows everybody,” he said. “I traveled to Europe and met Europeans who talked about him. He’s not just a Tucson icon, he’s more of a world fixture.”

On the night of Tiger’s birthday party, the bar was packed, well-wishers roaring with laughter inside and out.

Tiger was at the bar, serving drinks and hugging his customers. On his head sat a gold plastic crown that kept sliding down, covering his ears.

“He’s just an old-fashioned quirk,” said Maggie Evancho, 38, a regular who has been coming to the bar after work for 15 years.

Her friend, another longtime customer, India Hesse, 42, chimed in: “He takes such good care of us,” she said. “He’s part of the fabric of Tucson.” 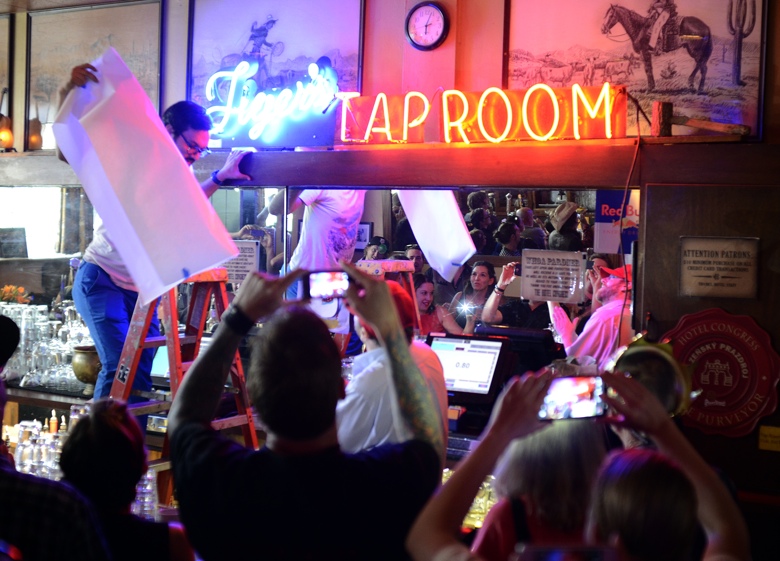 As Tiger served drinks, several employees hoisted a blanket-covered bulge next to the neon red Tap Room sign above the bar. One bartender stood on a ladder and pulled a crinkly piece of paper from his pocket.

They pulled back the blanket and revealed a neon blue sign with the word “Tiger’s” written in cursive.

Tiger scrunched his watery eyes and placed his face in his hands as the room cheered.

A birthday cake, topped with 80 thin, white candles and a bobble-headed tiger, was brought out.

He looked at the cake, apprehensively at first, then blew out the candles in four huge puffs that racked his 100-pound frame as the bar sang “Happy Birthday.”

He stood under the new sign, smiled and waved, bombarded by camera flashes.

The sign will remain, even when records for the jukebox are impossible to replace, even when Tiger is gone. 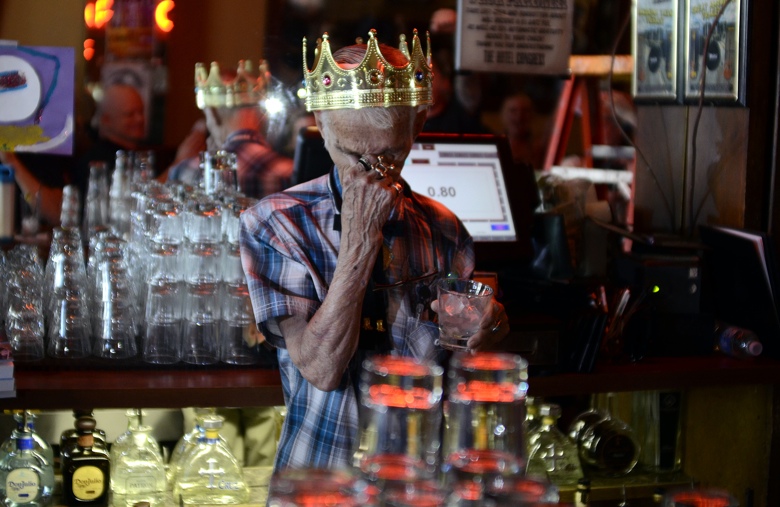