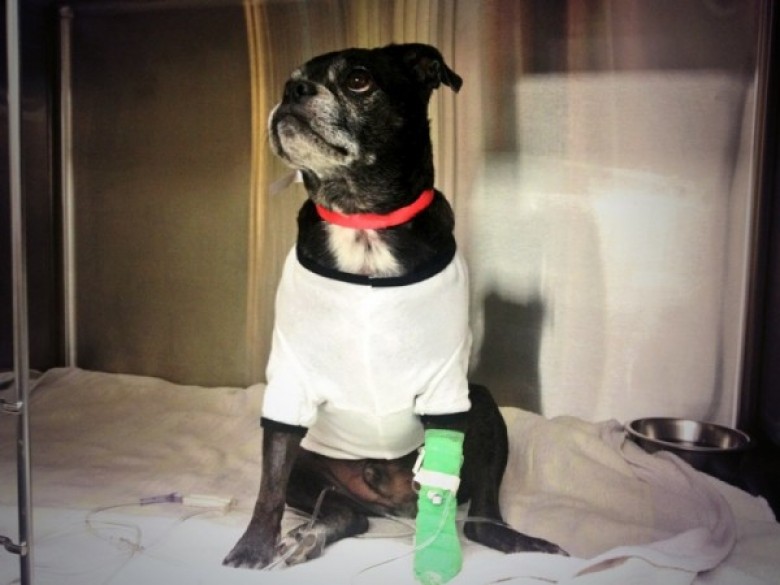 Jackson, a 6-year-old Boston terrier and pug mix, has one last chance for survival.

Eight months ago, he tested positive for Valley fever, a fungal disease that has raged through human populations in California and Arizona in recent years.

However, few know that the disease affects animals, too.

For Jackson, the available medications — most of which are intended for humans — have failed to help him. And though research on Valley fever has historically been underfunded, experts say, money to find a cure for animals is virtually nonexistent.

“My cases have been really bad this year in terms of treatability and I have no idea why,” said Dr. Lisa Shubitz, a veterinarian who researches Valley fever. “I’m seeing cases that I can’t treat and I feel terrible about it.”

The only option Jackson has left is Amphotericin, an antifungal medication injected through a vein in his left leg. He is undergoing 15 to 18 sessions of about two hours each in hopes of getting rid of the fungus.

“The hardest thing has been seeing him be sick and in pain and discomfort,” said Jackson’s owner, Bobbi Jane Tucker. “It’s been really stressful for both him and I.”

Just like humans, animals contract Valley fever from exposure to airborne spores of the fungus, which lives in the soil. While Tucson researchers and veterinarians do not know exactly how many animals are infected with Valley fever, they say they have seen an increase in the severity of the cases in recent years.

Shubitz has been trying to educate vets, raise awareness and study the disease in animals.

Despite her efforts, she has received little funding for research. The majority of the money goes to human research, and still, the money is scarce.

“This is the Valley fever hot spot of the universe, or so it feels likes it,” Shubitz said of Tucson. “

It would be nice if people outside of Arizona thought it was important enough to consider that the disease needs attention and funding.”

Dogs comprise the majority of animals who suffer from Valley fever, but cats, monkeys, marine mammals and other zoo animals can contract it, too.

Symptoms for infected animals are similar to those exhibited by humans: They experience coughing, fever, weight loss, lack of appetite and lack of energy. The fungus starts in the lungs, but can spread to bones, skin and other parts of the body.

Veterinarians can prescribe oral medications, designed for humans, which cost $2 per pill. But the drugs are not always effective.

Since November, Tucker has spent about $2,500 in treatment, she said.

Some animals survive Valley fever on their own, said Jackson’s vet, James Boulay. But others can’t shake the illness because their immune system fails to recognize that the fungus is a problem.

“Sometimes we can control it and we can treat it. Some of them get over it,” Boulay said. “But if they have it in the bones or limbs, they have to be treated.”

So far, Jackson has undergone two rounds of treatment and has responded well. But Valley fever is known to relapse in both humans and dogs.

The disease is not contagious, but Tucker cannot help but worry.

“I was concerned and just as a precaution I went to get the test — I didn’t have Valley fever,” Tucker said. “But it does make you look at it differently. When you know someone who has Valley fever or your pet has Valley fever, you become very aware of the chronic illness that it is.”