Art in the Desert

(Soundbite of music and entering the shop)

Narrator: Jorge Gonzales, 53 from Manizales, Colombia sleeps in a small mattress on the floor of the Sculpture Resource Center in Tucson, Arizona. He uses his lifelong skills as a welder to pursue his dream of becoming a sculptor.

Gonzalez: (En nuestros paises de latino america,) In our Latin American countries we would see the landscapes here in the roadrunner and coyote cartoons so today I am making that real.

Gonzalez: (La esculptura va a ser “La hora de la Verdad,”) The sculpture is going to be called “The hour of truth, they meet to see what will happen.”

Narrator: Back in Colombia, Gonzales left behind the welding shop his father left him along with his wife and two teenaged sons.

Gonzalez: (Gracias a Dios encontre el sitio que yo queria.) Thank god I found the place that I wanted, a welding shop with other artists that helped me because I had never made art.

Narrator: When looking for a job at the bicycle shop next door in 2008, Gonzales stumbled upon this art space where he met two local artists, Joshua Woodhall and Ernest Espinoza.

Woodhall: My name is Joshua Woodhall. I’m a painter. I’m 34

Narrator: Woodhall was one of the local artists who inspired Gonzalez when he first arrived.

Woodhall: I was hit by a car when I was eleven and everything was erased from me; talking, walking, swallowing but I could still draw just like before the accident.

Narrator: Woodhall has devoted his entire life to art. He spends all day at the center working on becoming a famous artist. 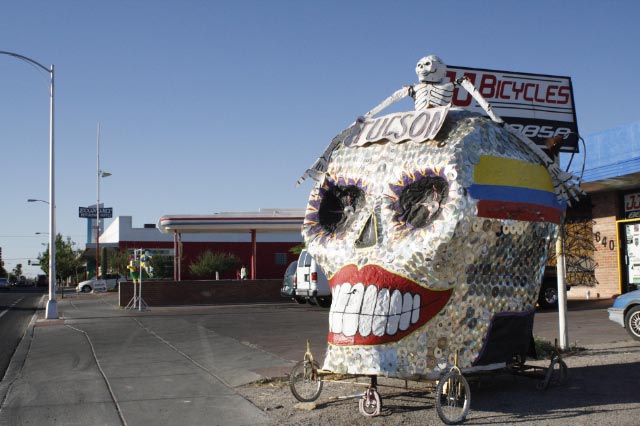 La Calavera, or The Skull is a huge skull in front of the Sculpture Resource Center made of, among other things, hundreds of CDs. Jorge Gonzalez participated in making this sculpture. Kristian Hernández | NYT Institute

Woodhall: The ultimate goal is for some 13 year-old kid to look at a book that I’m in and say ‘Oh my god I have to paint’… and if I do that then I have succeeded.

Narrator: Ernesto Espinoza, 29 is like a younger brother to Woodhall. He’s one of the first members of this center. He studies mechanical engineering at the University of Arizona.

Espinoza: I am very mechanically inclined. I have made mechanical solutions when I was a little kid that have astounded adults and up to this day I am studying mechanisms and actions.

Narrator: In the middle of the backyard metal shop, an 8-ft black iron sculpture shadows everything around it. Ernie created the sculpture 3 years ago and named it after his mother Sue.

Espinoza: It’s a mechanical hammer with a big cam and spring action made from railroad track that I hacksawed. I wouldn’t have done that if it wasn’t for Jorge. One day he came in here and was like, in Columbia I can hacksaw a railroad track no problem in 45 minutes.

Narrator: Over the years the three artists have come across many who attempt to define them. They resist any notion that this special place they share can be labeled.

Espinoza: It’s very difficult to try to define this place, if you do you will begin to destroy it.